Reference procedures for the measurement of gaseous emissions from livestock houses and stores of animal manure.

Reference procedures for the measurement of gaseous emissions from livestock houses and stores of animal manure. 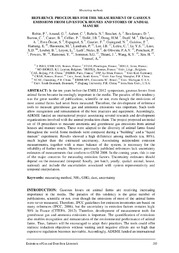 Resumo: In the ten years before the EMILI 2012 symposium, gaseous losses from animal farms became increasingly important in the m edia. The paradox of this tendency was the great number of publications, scientific or not, even though the emissions of most animal farms had never been measured. Therefor e, the development of reference tools to measure greenhouse gas and ammonia emissio ns was important. Such tools allow recognition and remuneration of the best pract ices and equipment. Accordingly, ADEME funded an international project associating several research and development organizations involved with the animal production chain. The project proposed an initial set of 18 procedures to measure ammonia and greenho use gas emissions from animal houses and manure stores. These were adapted to the diversity of animal farms found throughout the world. Some methods were compared duri ng a ?building? and a ?liquid manure? experiment. Results showed a high difference among methods (ca. 80%), much higher than the estimated uncertainty. Associat ing independent emission measurements, together with a mass balance of the system, is necessary for the reliability of further results. However, previously published references lack uncertainty estimates of measurements that conform to GUM 2008. In the coming years, this is one of the major concerns for measuring emission factor s. Uncertainty estimates should depend on the measurand (temporal: hourly, per batch, yearly; spatial: animal, house, national) and include the uncertainties associated with system representativity and temporal interpolation.