Agriculture and forest: A sustainable strategy in the Brazilian Amazon.

Agriculture and forest: A sustainable strategy in the Brazilian Amazon. 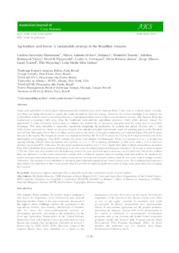 Resumo: Large-scale agriculture is increasing in anthropogenically modified areas in the Amazon Basin. Crops such as soybean, maize, oil palm, and others are being introduced to supply the world demand for food and energy. However, the current challenge is to enhance the sustainability of these areas by increasing efficiency of production chains and to improve environmental services. The Amazon Basin has experienced a paradigm shift away from the traditional slash-and-burn agricultural practices, which offers decision makers the opportunity to make innovative interventions to enhance the productivity in previously degraded areas by using trees to ecological advantage. This study describes a successful experiment integrating the production of soybean and paricá (Glycine max L. and Schizolobium amazonicum) based on previous research that indicated potential topoclimatic zones for planting paricá in the Brazilian state of Pará. This paper shows that a no-tillage system reduces the effects of drought compared to conventional tillage still used by many farmers in the region. The integrated system was implemented during the 2014/2015 season in 234.6 ha in the high-potential zone in the municipality of Ulianópolis, Pará. Both soybean and paricá were planted simultaneously. Paricá was planted in 5 m x 2 m inter-tree spacing totaling 228x103 trees per hectare and soybean, in 4 m x 100 m spacing, distributed in nine rows with a 0.45 m inter-row distance, occupying 80% of the area. The harvested soybean production was 3.4 t ha-1, higher than other soybean monocultures in eastern Pará. Paricá benefited from soybean fertilization in the first year: It exhibited rapid development in height (3.26 m) and average diameter (3.85 cm). Trees and crop rotation over the following years is six years for forest species and one year for each crop. Our results confirm there are alternatives to the current production systems able to diminish negative impacts resulting from monoculture. In addition, the system provided environmental services such as reduced soil erosion and increased carbon stock by soil cover with no-tillage soybean cultivation. The soybean cover contributes to increased paricá thermal regulation and lower forestry costs. We concluded that innovative interventions are important to show local farmers that it is possible to adapt an agroforest system to large-scale production, thus changing the Amazon.