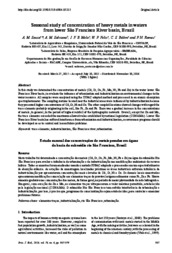 Resumo: In this study we determined the concentration of metals (Cd, Cr, Cu, Fe, Mn, Ni, Pb and Zn) in the water lower São Francisco River basin, to evaluate the influence of urbanization and industrialization on environmental changes in the water resource. All samples were analyzed using the IUPAC adapted method and processed in an atomic absorption spectrophotometer. The sampling stations located near the industrial areas were influenced by industrialization because they presented higher concentrations of Cd, Cr, Ni and Cu. The other sampled locations showed changes with regard the trace elements probably originating in the soil, like Fe, Zn and Pb. There was a gradual increase in the concentrations of metals, in general, in the period of highest rainfall of the hydrographic network. Overall, except for Zn and Mn, the trace elements exceeded the maximum allowed value established by national legislation (CONAMA). Lower São Francisco River basin has suffered interference from urbanization and industrialization, so awareness programs should be developed so as to control and lessen future problems.