Symbiotic compatibility between arbuscular mycorrhizal fungi (autoctone or exotic) and three native species of the Caatinga in different phosphorus levels.

Symbiotic compatibility between arbuscular mycorrhizal fungi (autoctone or exotic) and three native species of the Caatinga in different phosphorus levels. 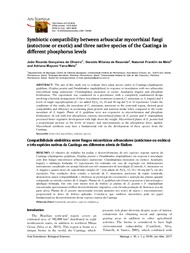 Resumo: The aim of this study was to evaluate three plant species native to Caatinga (Aspidosperma pyrifolium, Ziziphus joazeiro and Pseudobombax simplicifolium) in response to inoculation with two arbuscular mycorrhizal fungi (autoctone: Claroideoglomus etunicatum or exotic: Acaulospora longula) and phosphate fertilization. The experiment was conducted in a greenhouse with a completely randomized design involving a factorial arrangement of three inoculation treatments control, C. etunicatum or A. longula ) and 4 levels of single superphosphate (0 - no added P 2 O 5 , 12, 24 and 48 mg dm -3 ) in 10 repetitions. Under the conditions of this study, the inoculum of C. etunicatum , autoctone to the semi-arid region, showed great compatibility and efficiency in promoting plant growth and nutrient intake when compared to the exotic inoculum of A. longula. Plants of A. pyrifolium were not responsive to mycorrhization and hosphate fertilization. In soil with low phosph orus content, mycorrhized plants of Z. joazeiro and P. simplicifolium presented better vegetative development with high shoot dry weight. Mycorrhized plants of Z. joazeiro had a proportional increase in the levels of macro- an d micronutrients at the phosphorus doses applied. Mycorrhizal symbiosis may have a fundamental role in the development of these species from the Caatinga.