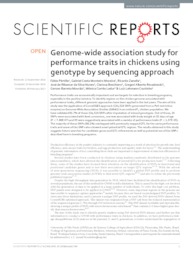 Resumo: Performance traits are economically important and are targets for selection in breeding programs, especially in the poultry industry. To identify regions on the chicken genome associated with performance traits, different genomic approaches have been applied in the last years. The aim of this study was the application of CornellGBS approach (134,528 SNPs generated from a PstI restriction enzyme) on Genome-Wide Association Studies (GWAS) in an outbred F2 chicken population. We have validated 91.7% of these 134,528 SNPs after imputation of missed genotypes. Out of those, 20 SNPs were associated with feed conversion, one was associated with body weight at 35 days of age (P < 7.86E-07) and 93 were suggestively associated with a variety of performance traits (P < 1.57E-05). The majority of these SNPs (86.2%) overlapped with previously mapped QTL for the same performance traits and some of the SNPs also showed novel potential QTL regions. The results obtained in this study suggests future searches for candidate genes and QTL refinements as well as potential use of the SNPs described here in breeding programs.