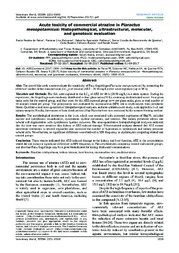 Resumo: The aim of this work was to evaluate the sensitivity of Pacu fingerlings (Piaractus mesopotamicus) by measuring the effects of median lethal concentration (LC50) of atrazine (ATZ - 28.58 mg/L) after acute exposure (up to 96 h). The fish were exposed to the LC50 of ATZ for 96 h (28.58 mg/L) in a static system. During the experiment, the fingerlings were randomly distributed in four glass tanks (50 L) containing dechlorinated water. Four glass tanks were for the control group, and four were for the ATZ-exposed group (n=4 per glass tank), given a total number of 16 animals tested per group. The genotoxicity was evaluated by micronucleus (MN) test in erythrocytes from peripheral blood. Qualitative and semi-quantitative histopathological analyses, and also ultrastructural study, were applied in liver and kidney samples. Finally, the content of heat shock protein (Hsp70) in the liver was evaluated by the western blotting method. The morphological alterations in the liver, which was associated with increased expression of Hsp70, included nuclear and cytoplasmic vacuolization, cytoplasmic hyaline inclusions, and necrosis. The kidney presented edema and tubular cell degeneration with cytoplasmic hyaline inclusion. The semi-quantitative histopathological analyses indicated that the liver was more sensitive than kidney to ATZ-induced damage. Ultrastructural analysis showed that ATZ caused membrane alterations in several organelles and increased the number of lysosomes in hepatocytes and kidney proximal tubular cells. Nevertheless, no significant difference was observed in MN frequency in erythrocytes comparing treated and control groups. These results indicated that ATZ-induced damage to the kidney and liver function, ATZ at the concentration tested did not induce a significant difference in MN frequency in Pacu erythrocytes comparing treated and control groups, and also that Pacu fingerlings may be a good bioindicator for testing freshwater contamination.