Expansion of palm oil (Elaeis guineensis Jacq.) in the state of Maranhão and soil water deficit limitations in the Brazilian Amazon.

Expansion of palm oil (Elaeis guineensis Jacq.) in the state of Maranhão and soil water deficit limitations in the Brazilian Amazon. 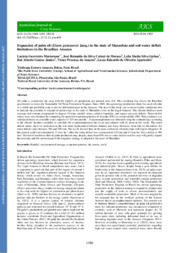 Resumo: Oil palm is considered the crop with the highest oil production per planted area unit. This condition has driven the Brazilian government to create the Sustainable Oil Palm Production Program. Since 2009, the agroenergy production chain has used oil palm as a viable and profitable crop to recover deforested areas in the Amazon. The aim of this study was to assess hydric conditions able to indicate the potential to expand oil palm crops in the state of Maranhão, even in the Legal Amazon. The climate database used (average and extreme temperature in degrees Celsius; rainfall values; relative humidity, and vapour-pressure deficit). Water deficit values were was obtained by comparing the potential evapotranspiration of oil palm (ETc) to actual rainfall (ER). Water balance was calculated based on available water capacity of 125 mm.month-1. Evapotranspiration was obtained using the methodology according to the climate database available to calculate the evapotranspiration rate in an area planted with oil palm in this study. The water deficit values show no restriction in the soil water replacement between January and June. However, from July to December, the water deficit varies between 200 and 300 mm. The levels showed that, in the areas evaluated, oil palm crops will require irrigation. In this period, yield was estimated at 17 tons ha-1 when the water deficit was considered at 210 mm and 14 tons ha-1 for a deficit of 380 mm. This result reinforces that oil palm production may drop by more than 50% due to water deficits and the crop will greatly impact the economy and the environment if the irrigation strategy is adopted in the areas of Maranhão.