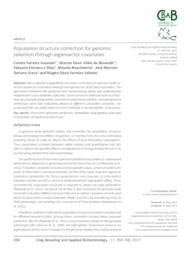 Resumo: We proposed a population structure correction for genome-wide selection based on covariance analysis via eigenvector (EVG) decomposition. The agreement between the predicted and true breeding values was evaluated by independent cross-validation data sets. Other correction methods such as correction via principal components, best linear unbiased prediction, and deregressed phenotype were also evaluated. Based on different simulation scenarios, the proposed EVG out performed the other methods in the prediction of accuracy.