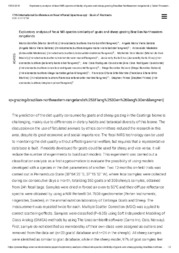 Resumo: Abstract: The prediction of the diet quality consumed by goats and sheep grazing in the Caatinga biome is challenging, mainly due to differences in dietary habits and botanical diversity of this biome. The discussion on the use of fistulated animals by ethics committees reduced the research in this area, despite its great economic and social importance. The fecal NIRS technology can be used to monitoring the diet quality without affecting animal welfare, but requires that a representative database is built. If models developed for goats could be used for sheep and vice versa, it will reduce the number of experiments to build such models. This experiment was carried out a classification analysis as a first approximation to evaluate the possibility of using models developed with a species in the diet parameters of another. On the other hand, in the dry season, litter, consisting of senescent leaves are the main or only source of feed for both making close the diet and the similarity of diets for both species. The fecal spectrum during the dry season is similar between goats and sheep grazing the same area. Even in periods of greater availability and variety of forage species, goats may be used to generate fecal NIR models applicable to both species.