Proline synthesis and physiological response of cassava genotypes under in vitro salinity.

Proline synthesis and physiological response of cassava genotypes under in vitro salinity. 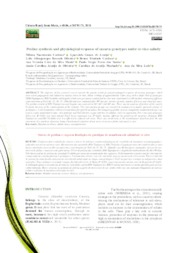 Resumo: The objective of this research was to evaluate the proline synthesis and physiological response of cassava genotypes which were micro propagated and induced to salinity stress in vitro. Micro cuttings of approximately 1.0cm long with a singl bud of genotypes TBRS Tapioqueira, BRS Verdinha and Lagoão which were previously established in vitro were inoculated in a MS medium containing different concentrations of NaCl (0; 25; 50; 75; 100mM) and were analyzed after 90th day for: number of roots, number of leaves and shoot dry mass. The proline content of BRS Tapioqueira and Lagoão was assessed at 30th, 60th and 90th day. There was no analysis of proline of the variety Verdinha because of the contamination of the explants. The experimental design was completely randomized in double factorial scheme (3 genotypes x 5 salt treatments), with seven repetitions for growth variables. For comparing proline content, completely randomized design was used in a plot subdivided in time, with genotype and NaCl factors in plot and time in subplot, with two repetitions. For r time and genotypes Tukey test (P<0,05) was used and for NaCl levels regression test (P<0,05). Salinity affected the growth of all varieties; although, BRS Tapioqueira and BRS Verdinha were less affected by induced salt stress. There was an increase in the accumulation of proline from the salt increment, this synthesis of proline being a biochemical indicator of salt stress in cassava plants cultivated in vitro.