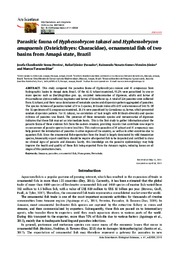 Resumo: This study compared the parasites fauna of Hyphessobrycon takasei and H. amapaensis from hydrographic basins in Amapá state, Brazil. Of the 42 H. takasei examined, 95.2% were parasitized by one or more species such as Dactylogyridae gen. sp., encysted metacercariae of digenean, adults and larvae of Procamallanus (Spirocamallanus) inopinatus and larvae of Camallanus sp. A total of 224 parasites were collected from H. takasei, and there was a dominance of nematode species and dispersion pattern aggregated of parasites. The species richness of parasites varied of 0 to 3 species, Brillouin index of 0-0.97 and evenness of 0-0.70. Of the 32 specimens of H. amapaensis examined, 28.1% were parasitized by Camallanus sp. larvae, which presented random dispersion pattern. For H. takasei, no correlation of host length with Brillouin diversity and species richness of parasites was found. The presence of these nematode species and metacercariae of digenean indicates that these fish may act as intermediate hosts. This is the first study to gather information about the parasite fauna of these endemic fish from the eastern Amazon, providing records that contribute new reports on occurrence of parasite species in new localities. This study on parasites of H. takasei and H. amapaensis may help prevent the introduction of parasites in other regions of the country, as well as in other countries due to aquarium fish. Since the ornamental fish exportation from the Brazil is largely dominated by wild Amazonian species, biosecurity export conditions should be require all exported fish to be inspected and certified to show no clinical signs of parasite and diseases. Lastly, this knowledge on the parasitic epidemiology may help improve the health and quality of these fish being exported from the Amazon region, reducing losses on all stages of this production chain.