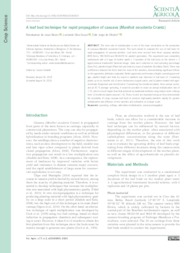 Resumo: The slow rate of multiplication is one of the main constraints on the production of cassava (Manihot esculenta Crantz). This work aimed to evaluate the use of leaf buds for rapid propagation of cassava varieties. Leaf buds were excised from three cassava varieties (BRS Kiriris, 98150-06 and 9624-09) for plantlet generation. The experiment was completely randomized with a 5 (age of mother plant) × 3 (position of the leaf buds on the stems) × 2 (agrochemical treatments) factorial design. Data were collected on leaf sprouting percentage (Spro.Per), plantlet height (Plant.Hei) and total dry mass of plantlets (Dry.Mass.Plant). There was a difference between the three traits for most of the varieties, demonstrating significant effects on the agronomic attributes evaluated. Better agronomic performance (higher sprouting percentage, plantlet height and total dry mass) in plantlets was observed in leaf buds of: i) maturing plants up to six months old; ii) more herbaceous (upper) parts; and iii) plants treated with agrochemicals (fungicides and insecticides). Considering four-month-old plants, three annual cycles, and an 81 % average sprouting, it would be possible to reach an annual multiplication rate of 1:72, which is much higher than that achieved by traditional methods using mature stem cuttings from 12-month-old plants (around 1:5). These results are important because they demonstrate the possibility of using cassava leaf buds to produce high-quality plantlets rapidly for greater multiplication and diffusion of new varieties and cultivation on a larger scale. 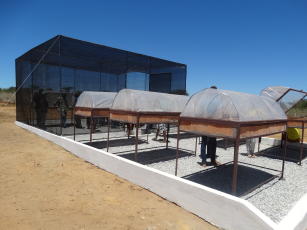