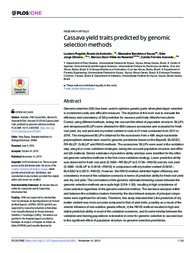 Resumo: Genomic selection (GS) has been used to optimize genetic gains when phenotypic selection is considered costly and difficult to measure. The objective of this work was to evaluate the efficiency and consistency of GS prediction for cassava yield traits (Manihot esculenta Crantz) using different methods, taking into account the effect of population structure. BLUPs and deregressed BLUPs were obtained for 888 cassava accessions and evaluated for fresh root yield, dry root yield and dry matter content in roots in 21 trials conducted from 2011 to 2016. The deregressed BLUPs obtained for the accessions from a 48K single nucleotide polymorphism dataset were used for genomic predictions based on the BayesB, BLASSO, RR-BLUP, G-BLUP and RKHS methods. The accessions? BLUPs were used in the validation step using four cross-validation strategies, taking into account population structure and different GS methods. Similar estimates of predictive ability and bias were identified for the different genomic selection methods in the first cross-validation strategy. Lower predictive ability was observed for fresh root yield (0.4569 ?RR-BLUP to 0.4756?RKHS) and dry root yield (0.4689 ?G-BLUP to 0.4818?RKHS) in comparison with dry matter content (0.5655 ? BLASSO to 0.5670 ?RKHS). However, the RKHS method exhibited higher efficiency and consistency in most of the validation scenarios in terms of prediction ability for fresh root yield and dry root yield. The correlations of the genomic estimated breeding values between the genomic selection methods were quite high (0.99?1.00), resulting in high coincidence of clone selection regardless of the genomic selection method. The deviance analyses within and between the validation clusters formed by the discriminant analysis of principal components were significant for all traits. Therefore, this study indicated that i) the prediction of dry matter content was more accurate compared to that of yield traits, possibly as a result of the smaller influence of non-additive genetic effects; ii) the RKHS method resulted in high and stable prediction ability in most of the validation scenarios; and iii) some kinship between the validation and training populations is desirable in order for genomic selection to succeed due to the significant effect of population structure on genomic selection predictions.