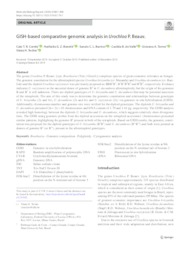 Resumo: The genus Urochloa P. Beauv. [syn. Brachiaria (Trin.) Griseb.] comprises species of great economic relevance as forages. The genomic constitution for the allotetraploid species Urochloa brizantha (cv. Marandu) and Urochloa decumbens (cv. Basilisk) and the diploid Urochloa ruziziensis was previously proposed as BBB1B1, B1B1B2B2 and B2B2, respectively. Evidence indicates U. ruziziensis as the ancestral donor of genome B2 in U. decumbens allotetraploidy, but the origin of the genomes B and B1 is still unknown. There are diploid genotypes of U. brizantha and U. decumbens that ay be potential ancestors of the tetraploids. The aim of this study was to determine the genomic constitution and relationships between genotypes of U. brizantha (2x and 4x), U. decumbens (2x and 4x) and U. ruziziensis (2x) via genomic in situ hybridization (GISH). Additionally, chromosome number and genome size were verified for the diploid genotypes. The diploids U. brizantha and U. decumbens presented 2n = 2x = 18 chromosomes and DNA content of 1.79 and 1.44 pg, respectively. The GISH analysis revealed high homology between the diploids U. brizantha and U. decumbens, which suggests relatively short divergence time. The GISH using genomic probes from the diploid accessions on the tetraploid accessions? chromosomes presented similar patterns, highlighting the genome B1 present in both of the tetraploids. Based on GISH results, the genomic constitution was proposed for the diploid genotypes of U. brizantha (B1B1) and U. decumbens (B1′B1′) and both were pointed as donors of genome B1 (or B1′), present in the allotetraploid genotypes.