An overview of forest loss and restoration in the Brazilian Amazon.

An overview of forest loss and restoration in the Brazilian Amazon. 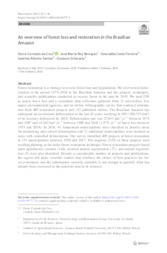 Resumo: Forest restoration is a strategy to reverse forest loss and degradation. We overviewed defor-estation in the period 1975?2018 in the Brazilian Amazon and the projects, techniques, and scientific publications conducted to recover forest in the area by 2019. We used GIS to assess forest loss and a systematic data collection gathered from 12 universities, five major environmental agencies, and an ad-hoc bibliographic survey that rendered informa-tion from 405 restoration projects and 152 published studies. The Brazilian Amazon has undergone an accelerated deforestation in the last 43 years, resulting in 20% (788,353 km2) of its territory deforested by 2018. Deforestation rate was 27,033 km2 yr−1 between 1975 and 1987 and 14,542 km2 yr−1 between 1988 and 2018 (1.97% yr−1 of forest loss between 1975 and 2018). In 2018, 41 Amazonian municipalities were classified as priority areas for monitoring and control deforestation and 21 additional municipalities were deemed as areas with controlled deforestation. Our survey identified 405 projects of forest restoration in 191 municipalities between 1950 and 2017. The majority (229) of these projects used seedling planting as the main forest restoration technique. Forest restoration projects based upon agroforestry systems (144), assisted natural regeneration (27), and natural regenera-tion (5) were also identified. Despite a considerable number of projects and publications, the region still lacks scientific studies that reinforce the choice of best practices for for-est restoration, and the information currently available is not enough to quantify what has already been recovered or the potential area to be restored