Selectivity of saflufenacil applied alone or mixed to glyphosate in maize.

Selectivity of saflufenacil applied alone or mixed to glyphosate in maize. 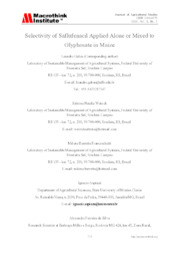 Resumo: The use of selective herbicides is important for weed management in agricultural crops. Selectivity studies of new molecules are really important to expand the control options of glyphosate-resistant and -tolerant eudicotyledons in corn. The objective of this work was to evaluate the selectivity of the herbicide saflufenacil applied alone in different doses in post-emergence of corn and in a mixture with glyphosate. The design used was randomized blocks, with four replications, with treatments consisting of five doses of saflufenacil, applied alone and in a mixture with a fixed dose of glyphosate, in addition to the weeded control and only glyphosate. At 7, 14, 21 and 28 days after application (DAT), the phytotoxicity of the herbicides to the crop was evaluated. The physiological variables were measured at 35 DAT. At harvest, yield components were determined, in addition to the mass of 1,000 grains and grain yield. The application of the mixture of glyphosate with saflufenacil increases phytotoxicity symptoms and yield losses. Doses of up to 70 g ha-1, applied alone, caused low phytotoxicity to corn and did not interfere in yield. The use of glyphosate + saflufenacil tank mixtures caused decreases in yield of 43.96 and 40.81% when compared, respectively, with the weeded control and the averages of the applications of the herbicides alone. Saflufenacil has the potential to be used in the management of eudicotyledonous weeds, as long as it is not mixed with glyphosate and the dose limit is respected.