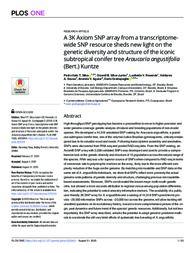 Resumo: High-throughput SNP genotyping has become a precondition to move to higher precision and wider genome coverage genetic analysis of natural and breeding populations of non-model species. We developed a 44,318 annotated SNP catalog for Araucaria angustifolia, a grandiose subtropical conifer tree, one of the only two native Brazilian gymnosperms, critically endangered due to its valuable wood and seeds. Following transcriptome assembly and annotation, SNPs were discovered from RNA-seq and pooled RAD-seq data. From the SNP catalog, an Axiom® SNP array with 3,038 validated SNPs was developed and used to provide a comprehensive look at the genetic diversity and structure of 15 populations across the natural range of the species. RNA-seq was a far superior source of SNPs when compared to RAD-seq in terms of conversion rate to polymorphic markers on the array, likely due to the more efficient complexity reduction of the huge conifer genome. By matching microsatellite and SNP data on the same set of A. angustifolia individuals, we show that SNPs reflect more precisely the actual genome-wide patterns of genetic diversity and structure, challenging previous microsatellitebased assessments. Moreover, SNPs corroborated the known major north-south genetic cline, but allowed a more accurate attribution to regional versus among-population differentiation, indicating the potential to select ancestry-informative markers. The availability of a public, user-friendly 3K SNP array for A. angustifolia and a catalog of 44,318 SNPs predicted to provide ~29,000 informative SNPs across ~20,000 loci across the genome, will allow tackling still unsettled questions on its evolutionary history, toward a more comprehensive picture of the origin, past dynamics and future trend of the species? genetic resources. Additionally, but not less importantly, the SNP array described, unlocks the potential to adopt genomic prediction methods to accelerate the still very timid efforts of systematic tree breeding of A. angustifolia.