Physical, physiological and sanitary quality of canola seeds after the application of maturing herbicides.

Physical, physiological and sanitary quality of canola seeds after the application of maturing herbicides. 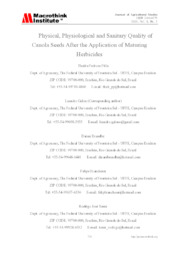 Resumo: The use of herbicides to anticipate harvesting in species with easy seed dehiscence may be an alternative to avoid maturation losses. However, the appropriate time for herbicide application is extremely important as it prevents the seeds from remaining in the field for long periods. The objective of this study was to evalu ate the efficiency of the application of maturing herbicides in two distinct seasons, and their effects on the physical, physiological, and sanitary quality of canola seeds. A randomized block experimental design arranged in a factorial scheme (herbicide x season + control) with four replications was used. Hybrid 50 canola plants were matured with the herbicides: glufosinate, paraquat, glyphosate, diquat, saflufenacil, 2,4 D, and paraquat + diuron twice during the crop cycle, G3 and G4, and two controls wit hout applicati on for each epoch, with the first being harvested the day of product application, and the second kept in the field until the final crop cycle. Analyses of one thousand seed weight, electrical conductivity, emergence speed index, and a sanity test were performed. The application of maturing herbicides to canola increases the one thousand seed weight and rate of emergence speed. At the same time, it increases electrical conductivity and the incidence of ungi. Plants that remained in the field u ntil the end of the crop cycle and did not receive herbicide application resulted in higher quality seeds. The most appropriate moment to apply maturation herbicides to canola is in the G4 season.herbicides to canola is in the G4 season.