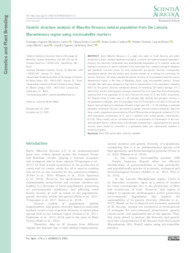 Resumo: Buriti (Mauritia flexuosa L.f), a palm tree native to South America and widely distributed in Brazil, displays significant ecological, economic and biotechnological importance. However, the disorderly extractivism and environmental degradation of its endemic areas are leading to reductions in, and/or extinction of the buriti palm tree, causing ecological imbalance with significant economic losses for rural communities and genetic diversity. Consequently, populational genetic diversity studies have become relevant as a strategy for conserving the species. Therefore, this study evaluated the genetic structure of 10 populations from the Lençóis Maranhenses region, in the state of Maranhão, Brazil, using microsatellite markers. Results indicated that eight pairs displayed a high level of polymorphism in the populations evaluated (98.5 %). The genetic diversity estimations allowed for identifying 220 alleles (average of 9.5 alleles/loci), and the heterozygosity averages observed (Ho) were lower than the heterozygosity expected (He) in the population (0.16 and 0.64) and loci levels (0.15 and 0.65), respectively. The Shannon Index (I) mean value of 1.36 indicated high diversity and genotypic richness in the populations evaluated, while the population index (FST) indicated a low value (0.05) and the fixation index pertaining to individuals indicated a high value (FIS = 0.79) exhibiting a moderate population distribution structure, and pointing to greater diversity between individuals. Based on these results, populations denominated as PA and PB presented a high genetic similarity (0.219), while populations denominated as PF and PJ exhibited more distant genetic characteristics (0.519). These results can be correlated based on prioritization of conservation of this non?domesticated species, influenced by environmental characteristics, suggesting that the genetic diversity found should be conserved in a germplasm bank, and subsequently exploited in breeding programs.