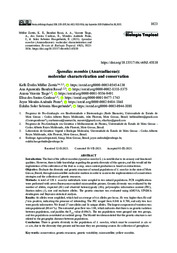 Resumo: Abstract: Introduction: The fruit of the yellow mombin (Spondias mombin L.) is notable due to its sensory and functional qualities. However, there is little knowledge regarding the genetic diversity of this species, and this would aid the implantation of the cultivation of the fruit as a crop, since current production is based on extractivism. Objective: Evaluate the diversity and genetic structure of natural populations of S. mombin in the state of Mato Grosso, Brazil, through microsatellite molecular markers in order to assist in the implementation of conservation strategies and the collection of genetic resources. Methods: A total of 139 S. mombin individuals were sampled in ten natural populations. PCR amplifications were performed with seven fluorescence-marked microsatellite primers. Genetic diversity was evaluated by the number of alleles, expected (He) and observed heterozygosity (Ho), polymorphic information content (PIC), fixation index (?), rare and exclusive alleles. The genetic structure was evaluated using AMOVA, UPGMA dendrogram and Bayesian statistical analysis. Results: 46 alleles were amplified, which had an average of 6.6 alleles per locus. He was higher than Ho and f was positive, indicating the presence of inbreeding. The PIC ranged from 0.048 to 0.700, and only two loci were poorly informative. We found 27 rare alleles and 16 unique alleles. The largest component of variation was intrapopulational (90.64 %). The estimated gene flow was 1.99, which indicates that there is no genetic isolation between populations, and justifies the FST value (0.0963). The ten populations were grouped into two groups, and two populations constituted an isolated group. The Mantel test demonstrated that the genetic structure is not related to the geographic distance between populations. Conclusion: There is genetic diversity in the populations of S. mombin, which must be conserved in situ or ex situ, due to the diversity they present and because they are promising sources for collection of germplasm.