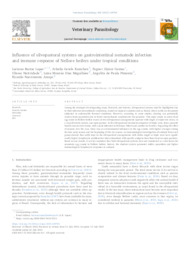 Resumo: Abstract: Among the strategies for integrating crops, livestock, and forestry, silvopastoral systems must be highlighted due to their inherent microclimatic conditions, mainly in tropical countries such as Brazil, where cattle are frequently subjected to unfavorable thermal conditions. However, according to some studies, shading can potentially worsen herds´ parasitism due to better microclimatic condition for the parasites. This study aimed to assess fecal egg count in Nellore heifers reared in two silvopastoral arrangements (pasture with single or triple tree rows), in a crop-livestock system, and open pasture. In the silvopastoral treatment composed of triple rows, lesser parasite burden means were found, with a peak infection in February/March and another in October. Regarding the effect of seasons over the year, there was an environmental influence on the egg counts, with higher averages during the late rainy season and the beginning of the dry season. An immunological investigation of animals from each group showed that cattle kept on the silvopastoral arrangements with either single or triple rows have significantly higher lymphocyte proliferation when stimulated with specific antigens than those kept on open pastures. Based on our results, it can be concluded that both silvopastoral systems were not considered as a risk factor for nematode egg counts in Nellore heifers. Indeed, the shadiest system promoted milder parasitism and higher immunological lymphocyte responses in animals.