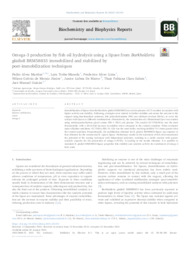 Resumo: Immobilization of lipase from Burkholderia gladioli BRM58833 on octyl sepharose (OCT) resulted in catalysts with higher activity and stability. Following, strategies were studied to further stabilize and secure the enzyme to the support using functionalized polymers, like polyethylenimine (PEI) and aldehyde-dextran (DEXa), to cover the catalyst with layers at different combinations. Alternatively, the construction of a bifunctional layer was studied using methoxypolyethylene glycol amine (NH 2 -PEG) and glycine. The catalyst OCT-PEI-DEXa was the most thermostable, with a 263.8-fold increase in stability when compared to the control condition. When evaluated under alkaline conditions, OCT-DEXa-PEG 10 /Gly was the most stable, reaching stability 70.1 times greater than the control condition. Proportionally, the stabilization obtained for B. gladioli BRM58833 lipase was superior to that obtained for the commercial B. cepacia lipase. Preliminary results in the hydrolysis of fish oil demonstrated the potential of the coating technique with bifunctional polymers, resulting in a stable catalyst with greater catalytic capacity for the production of omega-3 PUFAs. According to the results obtained, it is possible to modulate B. gladioli BRM58833 lipase properties like stability and catalytic activity for enrichment of omega-3 fatty acids.