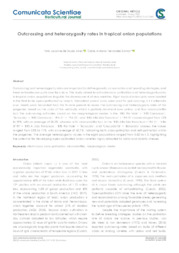 Resumo: Outcrossing and heterozygosity rates are important to define genetic conservation and breeding strategies, and these estimates are quite rare for onions. This study aimed to estimate cross-pollination and heterozygosity rates in tropical onion populations to guide the development of new varieties. Eight tropical onion pairs were isolated in the field to be open-pollinated by insects. Vernalized parent bulbs were used for pair-crossing in 1:1 alternate rows. Seeds were harvested from the female parents to assess the outcrossing and heterozygosity rates of the progenies based on the color of the red bulb, which is partially dominant over yellow, and four microsatellite loci. The outcrossing estimates based on the morphological marker in the ?BRS Rio Vale? × ?BRS Carrancas?, ?Botucatu? × ?BRS Carrancas?, ?IPA 11? × ?IPA 10?, and ?BRS Alfa São Francisco? × ?IPA10? crosses ranged from 15% to 39%, with an average of 28.2%, whereas with microsatellite loci, in the ?BRS Alfa São Francisco?×?IPA 11?, ?Alfa SF RT? × ?BRS A. São Francisco?, ?BRS Rio Vale? × ?Botucatu?, and ?Cascuda T6? × ?Botucatu? crosses, the values ranged from 33% to 71%, with an average of 42.7%, indicating both cross-pollination and self-pollination within the progenies. The average heterozygosity values in the eight populations ranged from 0.82 to 1.0, highlighting the potential for developing open-pollinated onion varieties highly adapted to biotic and abiotic stresses.