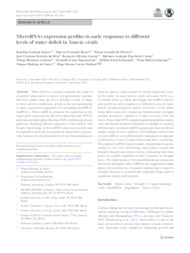 Resumo: Water deficit is a major constraint for crops of economic importance in almost all agricultural regions. However, plants have an active defense system to adapt to these adverse conditions, acting in the reprogramming of gene expression responsible for encoding microRNAs (miRNAs). These miRNAs promote the regulation to the target gene expression by the post-transcriptional (PTGS) and transcriptional gene silencing (TGS), modulating several pathways including defense response to water deficit. The broader knowledge of the miRNA expression profile and its regulatory networks in response to water deficit can provide evidence for the development of new biotechnological tools for genetic improvement of several important crops. In this study, we used Setaria viridis accession A10.1 as a C4 model plant to widely investigate the miRNA expression profile in early responses to different levels of water deficit. Ecophysiological studies in Setaria viridis under water deficit and after rewatering demonstrated a drought tolerant accession, capable of a rapid recovery from the stress. Deep small RNA sequencing and degradome studies were performed in plants submitted to drought to identify differentially expressed miRNA genes and their predicted targets, using in silico analysis. Our findings showed that several miRNAs were differentially modulated in response to distinctive levels of water deficit and after rewatering. The predicted mRNA targets mainly corresponded to genes related to cell wall remodeling, antioxidant system and drought-related transcription factors, indicating that these genes are rapidly regulated in early responses to drought stress. The implications of these modulations are extensively discussed, and higher-effect miRNAs are suggested as major players for potential use in genetic engineering to improve drought tolerance in economically important crops, such as sugarcane, maize, and sorghum.