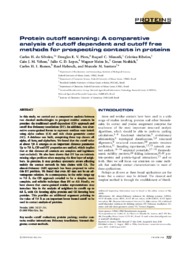 Resumo: In this study, we carried out a comparative analysis between two classical methodologies to prospect residue contacts in proteins: the traditional cutoff dependent (CD) approach and cutoff free Delaunay tessellation (DT). In addition, two alternative coarse-grained forms to represent residues were tested: using alpha carbon (CA) and side chain geometric center (GC). A database was built, comprising three top classes: all alpha, all beta, and alpha/beta. We found that the cutoff value? at about 7.0 A emerges as an important distance parameter.? Up to 7.0 A, CD and DT properties are unified, which implies that at this distance all contacts are complete and legitimate (not occluded). We also have shown that DT has an intrinsic missing edges problem when mapping the first layer of neighbors. In proteins, it may produce systematic errors affecting mainly the contact network in beta chains with CA. The almost-Delaunay (AD) approach has been proposed to solve this DT problem. We found that even AD may not be an advantageous solution. As a consequence, in the strict range up ? to 7.0 A, the CD approach revealed to be a simpler, more complete, and reliable technique than DT or AD. Finally, we have shown that coarse-grained residue representations may introduce bias in the analysis of neighbors in cutoffs up to ? 6.8 A, with CA favoring alpha proteins and GC favoring beta proteins. This provides an additional argument pointing to ? the value of 7.0 A as an important lower bound cutoff to be used in contact analysis of proteins.