Effects of weed control through cowpea intercropping on maize morphology and yield.

Effects of weed control through cowpea intercropping on maize morphology and yield. 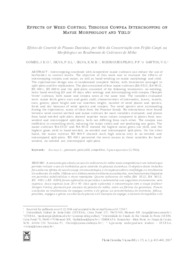 Resumo: Intercropping combined with competitive maize cultivars can reduce the use of herbicides to control weeds. The objective of this work was to evaluate the effects of intercropping cowpea and maize, as well as hand-weeding on maize morphology and yield. The experimental design was in randomized complete blocks, with treatments arranged in split-plots and five replications. The plots consisted of four maize cultivars (BA 8512, BA 9012, EX 4001, EX 6004) and the split-plots consisted of the following treatments: no-weeding; twice hand-weeding (20 and 40 days after sowing); and intercropping with cowpea (?Sempre Verde? cultivar), both maize and cowpea sown at the same time. The variables evaluated were: maize fresh green ears and grain yield; characteristics of internodes, leaves, tassels, ears, grains; plant height and ear insertion height; number of weed plants and species; fresh and dry biomass of weed species and cowpea. Ten weed species were outstanding during the experiment, many of them from the Poaceae family. No interactions were found between weed control method and maize cultivars for most variables evaluated; and plants from hand-weeded split-plots showed superior mean values compared to plants from nonweeded and intercropped split-plots, both not differing from each other. The cowpea was inefficient in controlling weed, reducing the maize yields and not producing any grain. The maize cultivars ?BA 8512? and ?BA 9012 showed the highest mean green ear yield, and the highest grain yield in hand-weeded, no-weeded and intercropped split-plots. On the other hand, the maize cultivar ?EX 6004? showed such high means only in no-weeded and intercropped split-plots. ?EX 4001 presented the worst means in these variables for handweeded, no-weeded ant intercropped split-plots.