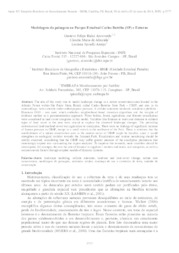 Resumo: The aim of this study was to model landscape change in a nature conservation area located in the Atlantic Forest within São Paulo State, Brazil, called Carlos Botelho State Park ? CBSP, and also in its surroundings, both currently under anthropogenic pressure. A cellular automata stochastic simulation platform - Dinamica EGO ? was used, which embodies neighborhood-based transition algorithms and the weights of evidence method as a parameterization approach. Water bodies, forest, agriculture, and forestry (eucalyptus) were considered as land cover categories in this model. Variables like distance to roads and distance to existent types of land cover in the area were crucial to explain the observed landscape changes. The prevailing conversion of land-use/land-cover was agriculture to eucalyptus. There were no findings of significant increase of human pressure in CBSP, except in a small stretch in the northwest of the Park. There is evidence that the establishment of a nature conservation area in the eastern sector of CBSP might be feasible, since it would strengthen an ecological corridor towards the Jurupará Park. Fiscalization and routine monitoring should be strictly observed, considering that the CBSP may suffer greater pressure of the eucalyptus plantations that increasingly expand into surrounding the region analyzed. To improve this research, more variables should be investigated, for example, the role the role of distance to suppliers / markets and roads, soil categories, as well as socioeconomic factors through coupled models of dynamic systems.