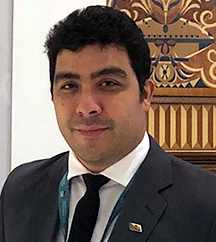 Agronomist, PhD in Genetic Improvement and researcher, current head of Embrapa Agroenergy, one of the main Brazilian research centers in bioenergy, biofuels, bioproducts and bioeconomy. He also works as Planning and Business Coordinator for the Brazilian Industrial Research and Innovation Corporation (Embrapii), in its Renewables Biochemistry Unit. He actively participates as an invited member in several governmental and private committees related to bioenergy. He teaches Plant Genetics, Plant Biotechnology and Agroenergy at some of the most prestigious Brazilian universities, such as Getulio Vargas Foundation and Federal University of Lavras (UFLA), and has large experience in leading research and innovation teams. In addition, he actively participates as a speaker in events in Brazil, USA, Europe, Asia and the Middle East. At Embrapa Agroenergy, he has been working as a researcher since 2011, having also served as Substitute Deputy Head of Research and Development (2014-2016) and Deputy Head of Technology Transfer (2016-2020), before becoming the Head of the research center in February 2020. 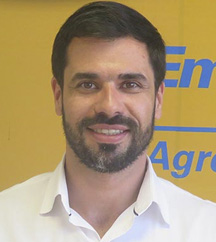 Agronomist, PhD in Plant Science, works mainly in the field of genetic improvement and production of plant species for energy purposes. He is a researcher at Embrapa Agroenergy since 2007 and represents Embrapa in the Sector Chamber of Oilseeds and Biodiesel at the Brazilian Ministry of Agriculture, Livestock and Food Supply. He is a research fellow at the National Council for Scientific and Technological Development (CNPq), professor in the Professional Master Course in Agribusiness at Fundação Getúlio Vargas (FGV) and in the graduate program in Bioenergy at Federal University of Londrina (UEL). At Embrapa Agroenergy he worked as Deputy Head of Communication and Business (2011), member of the Internal Technical Committee (2011 to 2021) and Supervisor of the Institutional Development Team - NDI (2016 to 2021). He became Embrapa Agroenergy’s Deputy Head of Research and Development in April 2021. 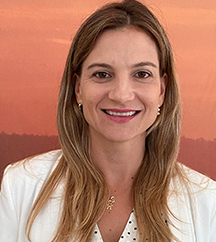 Chemist, PhD, with a sandwich doctorate at Vanderbilt Universitys "Mass Spectrometry Research Center", in Nashville, Tennessee, USA. She was a technical consultant at the Petrobras Research and Development Center (Cenpes). She works mainly in Plant and Yeast Metabolomics, with Imaging Mass Spectrometry and Bioprospecting of Bioactive Compounds. She has been a researcher at Embrapa Agroenergy since 2010 and coordinator of the Embrapa Agroenergy Embrapii Unit in Biochemistry of Renewables: dedicated to prospecting industrial partners, negotiation, management and monitoring of teams,research and innovation projects. She is a research fellow at the National Council for Scientific and Technological Development (CNPq), since 2019 and professor in the graduate program of the Institute of Chemistry at the Federal University of Goiás (UFG). She became Embrapa Agroenergy’s Deputy Head of Technology Transfer in February 2020. 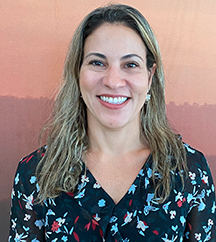 Chemist, MSc in Organic Chemistry from the State University of Campinas (Unicamp). She works mainly in the field of Organic Chemistry, with emphasis on Organic Synthesis and Analytical Chemistry. She has been an analyst at Embrapa Agroenergy since 2011, working as supervisor of the Quality Management Team and in the Laboratory Management Department. She became the Embrapa Agroenergy’s Deputy Head of Management in February 2020.