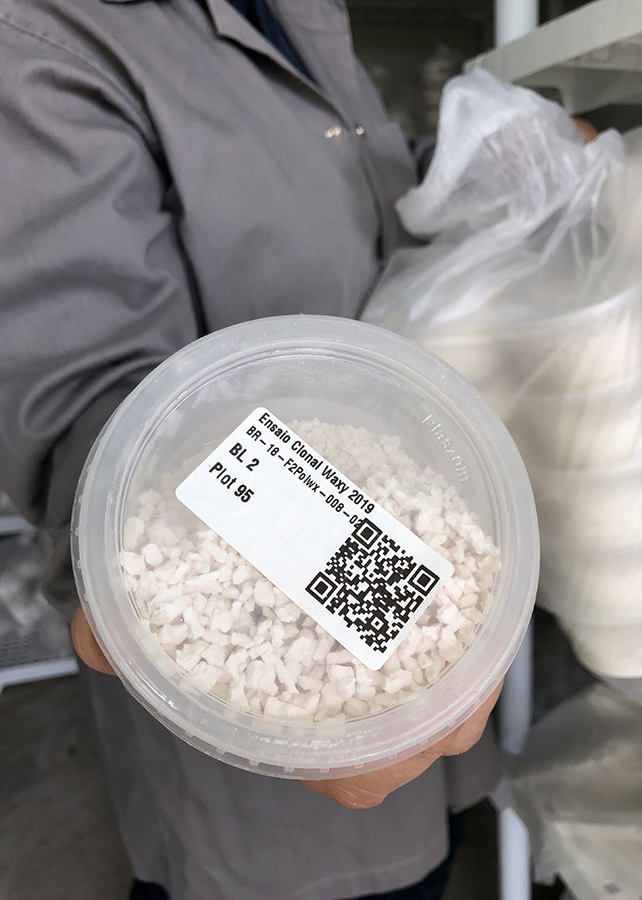 Waxy starch has characteristics of large interest, especially for the food industry

Studies by Embrapa and partners have developed three methodologies for early selection of cassava clones with waxy starch. That research is part of the company's effort to obtain a variety of cassava with this special type of starch that can be produced on a large scale in Brazil. Cassava starch is basically composed of two types of polysaccharides: amylose and amylopectin. Typically, commercial varieties have between 19% and 27% amylose in the starch composition. Waxy starch has a maximum of 5% amylose, a trait of large interest, especially for the food industry, due to its lower retrogradation (water loss after the finished product is cooled). Therefore, waxy cassava should generate benefits associated with its improved quality and with the shelf life of products derived from the industrialization of chilled and frozen foods that have waxy starch in their composition.

These papers, which were recently published in international journals, were created from the need to accelerate the process of developing waxy clones of Embrapa's cassava genetic improvement program. The main goal is to optimize the selection process of clones with this trait of interest, taking to the field only those that present waxy starch.

"Our methodologies bring great advantages over traditional methods of waxy starch assessment in cassava, which even though they are accurate, they are carried out late,” points out agronomist Eder Jorge Oliveira, a researcher at  Embrapa Cassava and Fruits (Cruz das Almas, Bahia), author of the papers alongside a team of students from the Federal University of Recôncavo da Bahia (UFRB) that is led by Cátia Dias do Carmo, main author of the studies. The papers are part of her doctoral thesis, supervised by Oliveira. Hernán Ceballos, a Cassava Program breeder at the International Center for Tropical Agriculture (Ciat), in Colombia, is a co-author of two of the papers.

Oliveira lists the potential impacts of those methodologies: reducing the area that is required to plan clones by at least 75%, possibility of breeding in the seedling phase (before the field stages), optimizing genetic improvement program costs, guaranteeing the traceability of future cultivars with waxy starch for the protection of intellectual property rights, and finally optimizing the time that is required for the development of cassava cultivars with waxy starch.

Carmo assesses the achieved results. "They represent important advances in early identification of waxy starch genotypes in cassava. It is gratifying for us, who work with agricultural science, to have the opportunity to develop technologies and methods with direct applicability. It is a double contribution: you have the scientific papers with the role of disseminating and contributing knowledge about a certain subject, and the methods with potential use within breeding programs," the author states.

Two of the methodologies are based on molecular analysis, with very high accuracy. The goal of the first study, Genome-wide association studies for waxy starch in cassava, published on the journal Euphytica, which is specialized in plant breeding, was to assess genome association studies to detect variants that are related to waxy starch and identify alternative genes or genomic regions responsible for the characteristic.  A total of 351 accessions belonging to the Active Cassava Germplasm Bank at Embrapa Cassava and Fruits, along with 31 waxy starch hybrids from crossings with the source AM206-5 (first natural waxy genotype of cassava discovered by Ciat), were analyzed. 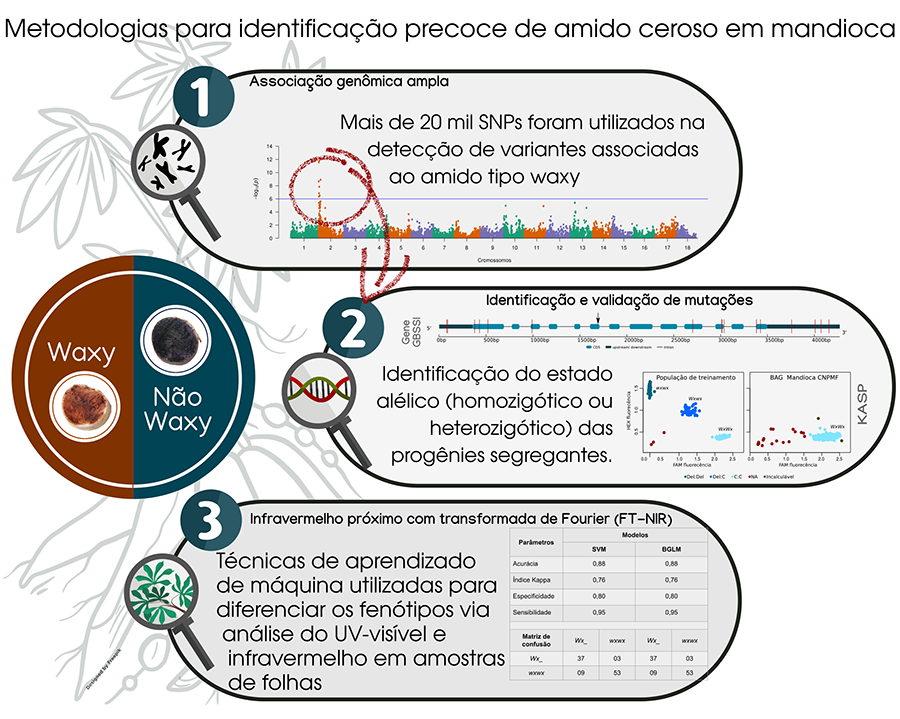 The first step, then, was to develop a methodology to locate the gene. "It is an analysis that doesn't necessarily go straight to the gene. It looks for a location on the chromosome that may be associated with the phenotype. Depending on the number of markers that are distributed throughout the genome, it is possible to detect the genes of interest with greater or lesser ease. That is the strategy. We identify a place on chromosome 2 that very clearly distinguishes the waxy from the non-waxy one, and, relatively close to that locus controlling that characteristic, we have the gene [GBSS1] that conditions the waxy phenotype in other species. Therefore, that version of that gene also exists in cassava," the researcher states. Oliveira says that methodology was a precursor to the following more refined work of gene marking.

In the second study, entitled Identification and validation of mutation points associated with waxy phenotype in cassava, published on BMC Plant Biology, a series of mutation points that show the difference between the two types of clones was identified. "We got a group of waxy and non-waxy genotypes [89 total], sequenced the GBSS1 gene from those clones and aligned it with DNA sequences deposited in the National Center for Biotechnology Information (NCBI), database, a global database that gathers data from genome sequencing. We thus discovered regions that are common to waxy and non-waxy clones and especially regions that are different, several mutations that show differences between waxy and non-waxy clones," the researcher describes. 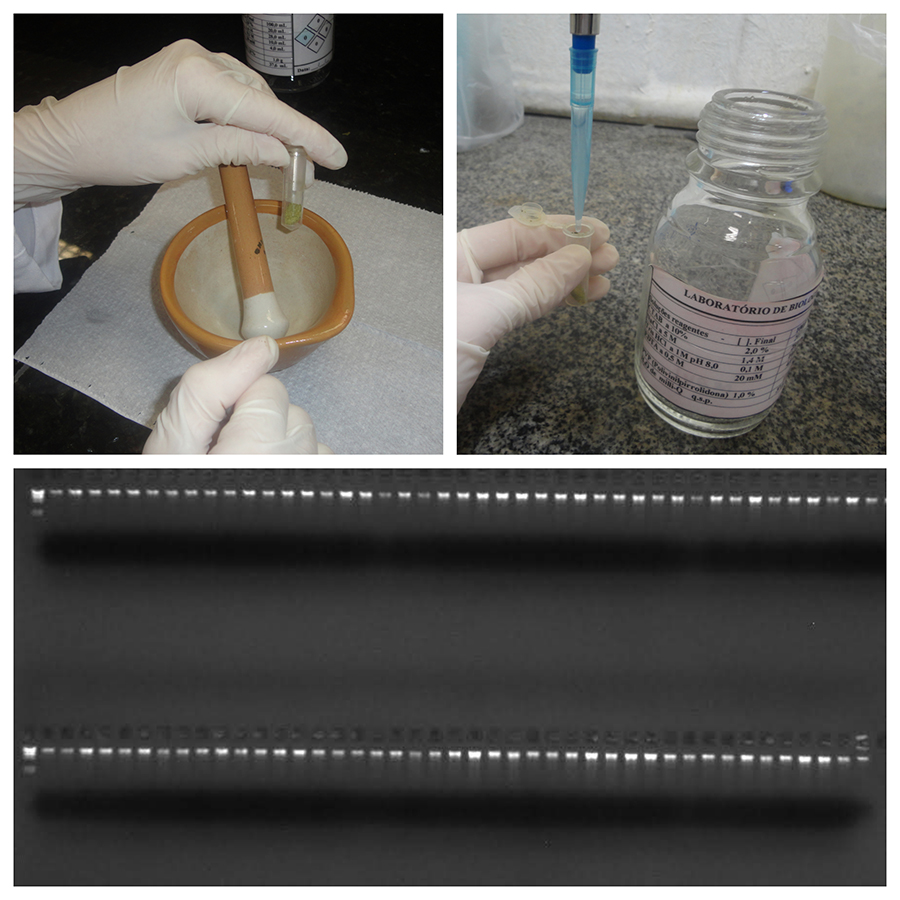 Once that was done, Oliveira says that primers (initial indicators) were designed to try to amplify those regions and check if there was the possibility of molecularly separating the clones with a certain mutation from the others. Thus, a specific mutation was identified and a series of markers were designed to verify if there was a way to separate waxy from non-waxy phenotypes. A type of marker was developed for this type of analysis, called KASP (Kompetitive Allele Specific PCR).

“The KASP strategy allows us to very clearly differentiate those two situations, with a great advantage: in addition to identifying those 25% of clones that are already waxy, we can select the clones that are heterozygous [whose alleles for a given characteristic are different]. If, by chance, we want to move forward with any of the heterozygous clones for further self-fertilization, we are also able to set apart those individuals. That brings a great methodological advantage to the breeding program: by separating what is heterozygous, that is, with at least one waxy allele, we are also able to do a second breeding cycle," he says.

Oliveira points out that any breeding program that uses this marker will be able to very accurately (98%) set these kinds of genotypes apart. He also adds that there is the future prospect of including several other characteristics that are already available for genotyping on this platform. "It is a sort of chip for all traits so that, in the seedling phase, we can segregate all those individuals that we identify with the most potential to become a variety." 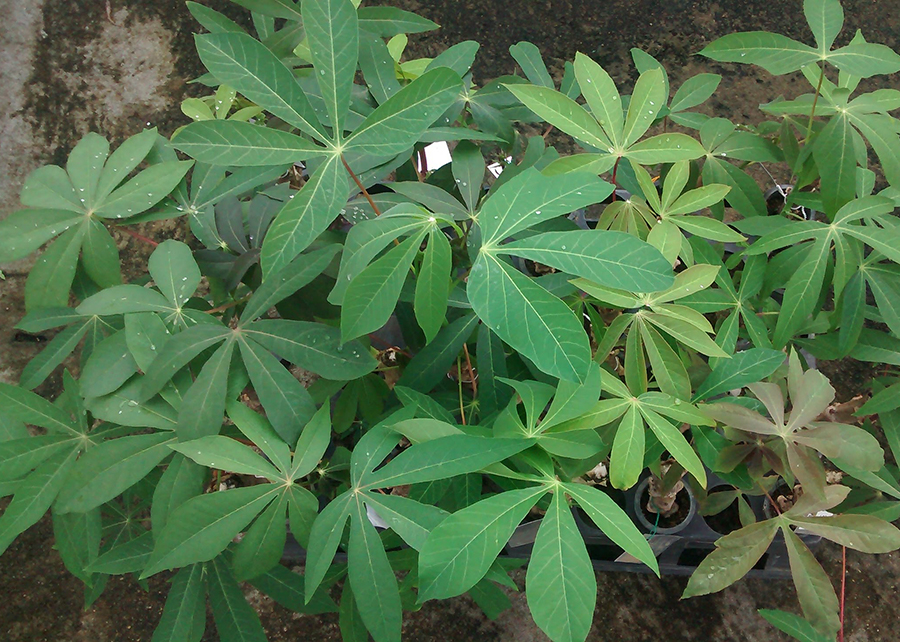 The third methodology, described in the paper Identification of waxy cassava genotypes using fourier-transform near-infrared spectroscopy, published on Crop Science, no longer involves genomic analysis, but leaf analysis, through near-infrared spectroscopy (NIRS) – a method that uses the interaction between matter and electromagnetic radiation –, which can be performed soon after seed germination, while still in a greenhouse.

According to the researcher, any organic compound that absorbs energy differently in this NIRS range is amenable to use in building phenotype classification models. "Starch consists basically of amylose and amylopectin. In the case of common starch, you have a range of 19% to 27% amylose. The rest is amylopectin. In waxy starch, you have practically 100% amylopectin and 0% amylose. Therefore, there is a very clear difference between the starch produced by waxy clones compared to non-waxy clones, and that variation can be easily picked up through NIRS."

Oliveira explains that starch synthesis happens in the leaves. It is then transported to the roots. Thus, there is a way to pick up this form of starch while still in the leaf. Samples were then standardized and used to read the NIRS. The work consisted of trying to create a model to classify whether the material was waxy or non-waxy. According to the researcher, five different models were used and the two that showed greater efficiency were chosen, with classification accuracy above 84%. "That means I will get it right in saying which are waxy or non-waxy in 84% of the samples read with NIRS, simply by analyzing the leaves, early on, while still in the greenhouse."

The main advantage of that strategy over genomic analysis, according to Oliveira, is the reduced cost. As he points out, practically all that is needed is to harvest the leaf, macerate it, prepare it, and make the readings and predictions. Whereas in genomic analysis there is an expense with reagents, equipment maintenance and service cost in case the material is sent for genotyping in another region of the country or even abroad. "Despite having lower accuracy than KASP analysis, NIR analysis has that great advantage," he points out. 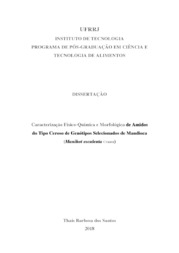