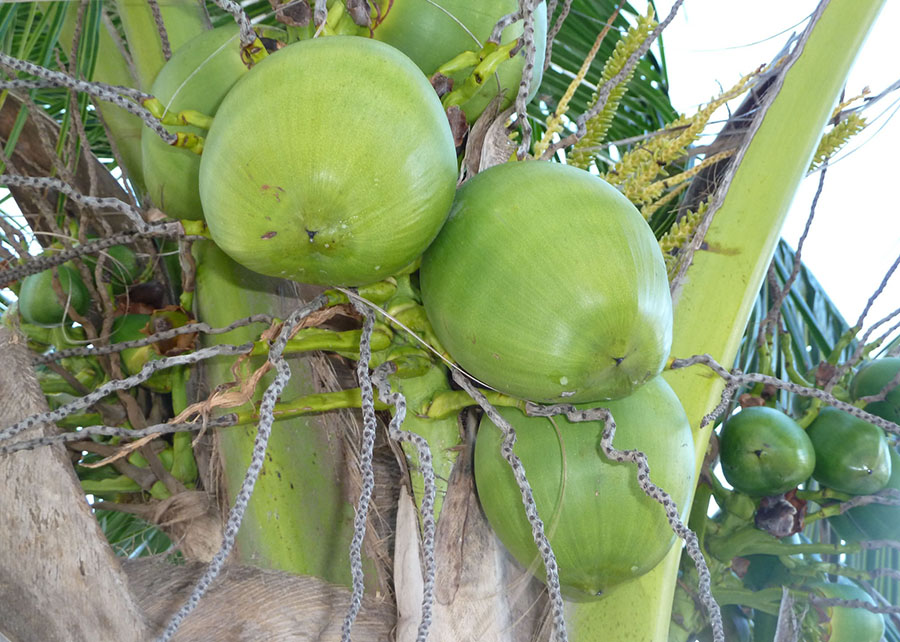 Researchers have studied the best use of the green coconut pulp, providing new options for healthy food products

Green coconut producers and agroindustries that produce packaged coconut water can use much more from the fruit than just the coconut water (liquid albumen) and give a profitable food use to the white pulp, the solid albumen, which is often discarded with the shell. Researchers from Embrapa Food Technology studied the best use of the pulp, providing entrepreneurs in this market segment with new options of healthy food products such as sweets, beverages, and a preparation that can give mild taste and aroma to different products.

In tests with consumers, the sensory acceptance of the new products obtained satisfactory results, which indicates high potential for commercial success. In addition to being a business option, they can contribute to converting something that is still treated as disposable waste into food. The study also precisely determined the best harvesting point for the green coconut, considering the balance between the thickness of the solid albumen and the quantity and quality of the coconut water.

The coconut fruit consists of liquid albumen, solid albumen or almond, endocarp, and the shell. The dwarf variety (photo below) is the most used one for the extraction of coconut water and, its  processing discards the shells and adhered solid albumen, a co-product with potential for industrial use. Green coconut is basically used for the consumption of liquid albumen (coconut water), especially in the national coastal zone. Its water corresponds to approximately 25% of the mass of the fresh fruit, that is, coconut water consumption and industrialization generate a large amount of waste. . 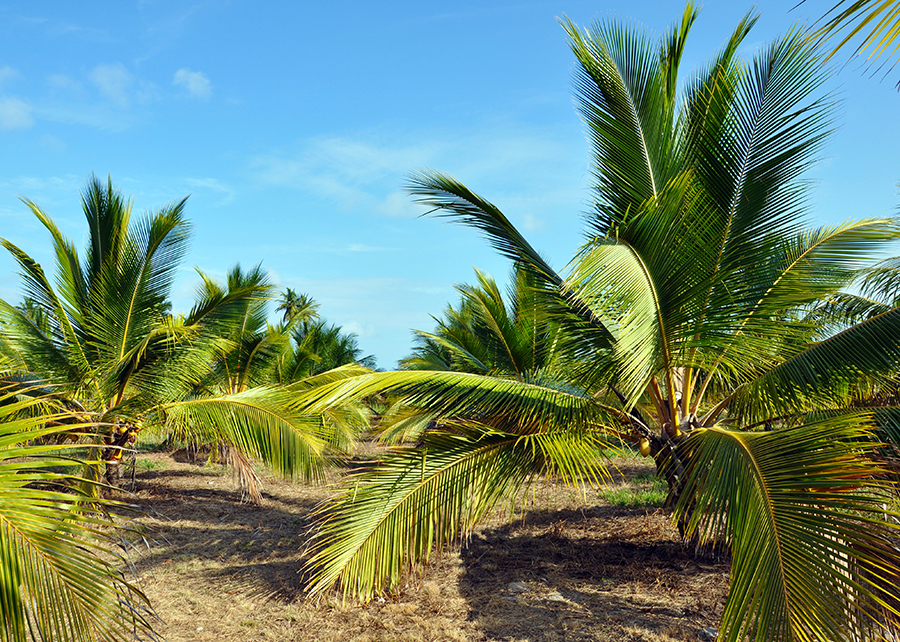 Creamy cocada and pulp in syrup

The green coconut solid albumen was the basis for the elaboration of a creamy cocadas added with tropical fruits and green coconut preserve in pineapple syrup, products that are still unheard of in the national market, and were proposed by the researcher Renata Torrezan and her team. Both products were made with no addition of preservatives, less added sugar, and lower energy value compared to traditional sweets on the market. 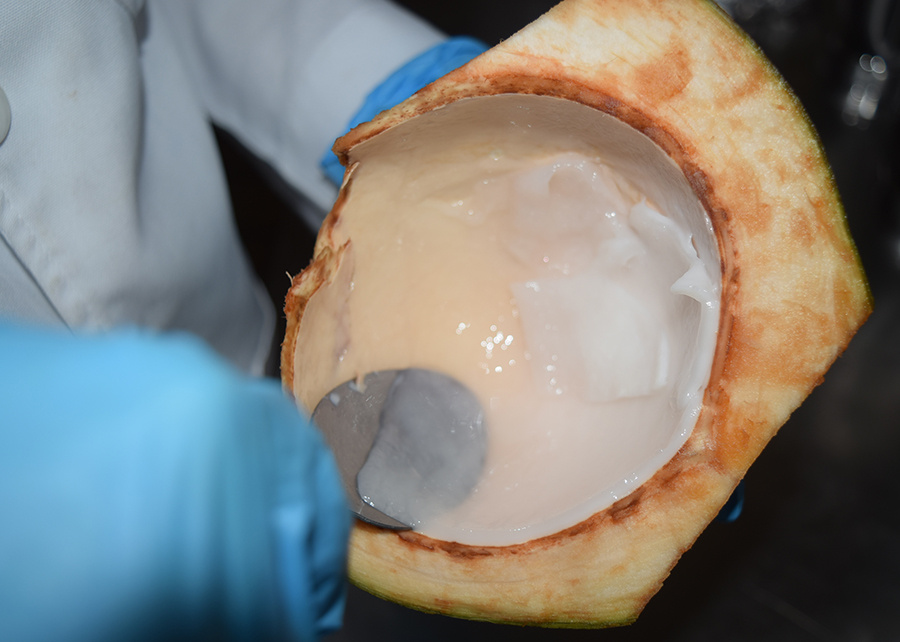 The solid albumen was manually extracted (photo on the left), the pulp was grated, and the cocadas were prepared with the addition of sugar, pectin, and were then concentrated to a creamy consistency. Four coconut sweet formulations were made in a creamy consistency with the addition of other fruit pulps: cocada with hog plum, cocada with papaya, cocada with pineapple, and cocada with mango. The creamy cocada recipes based on green coconut pulp and tropical fruits obtained good sensory acceptance and were stable when stored in polypropylene containers under refrigeration for at least 28 days. 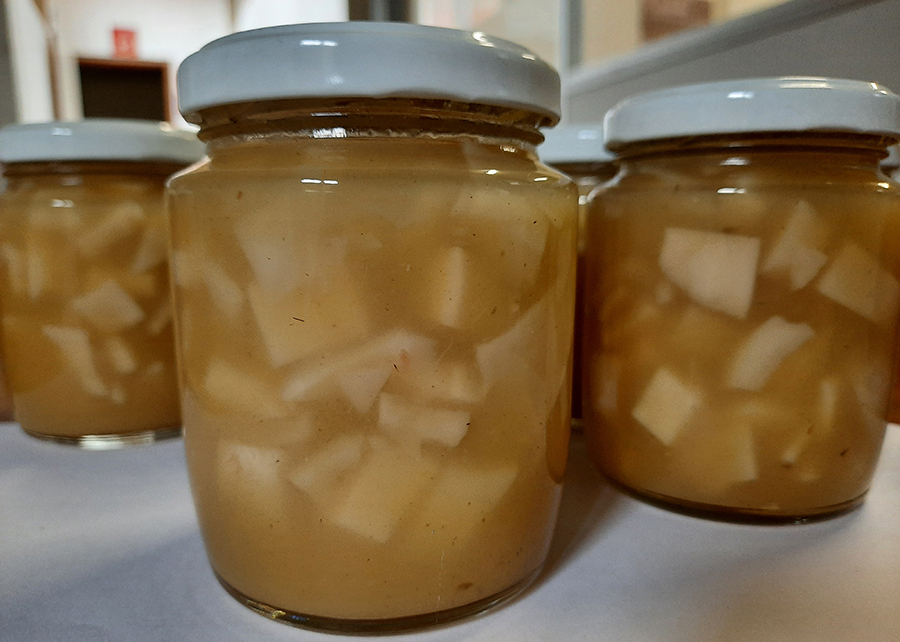 Another product is a green coconut preserve in pineapple syrup (photo on the right) made with pulp cut into pieces and immersed in pineapple syrup. The recipe for this sweet obtained good sensory acceptance and purchase intention. Its preparation employs pasteurization technology using widely available ingredients, and it can be packaged without the use of equipment.

The use of tropical fruits in the cocada and preserve products enhances the Brazilian biodiversity and makes its production viable throughout the national territory. The industrial production of the creamy cocadas and of the green coconut preserve in pineapple syrup are viable technologies for adoption by small and medium-sized fruit processing and fruit-based sweet agroindustries. 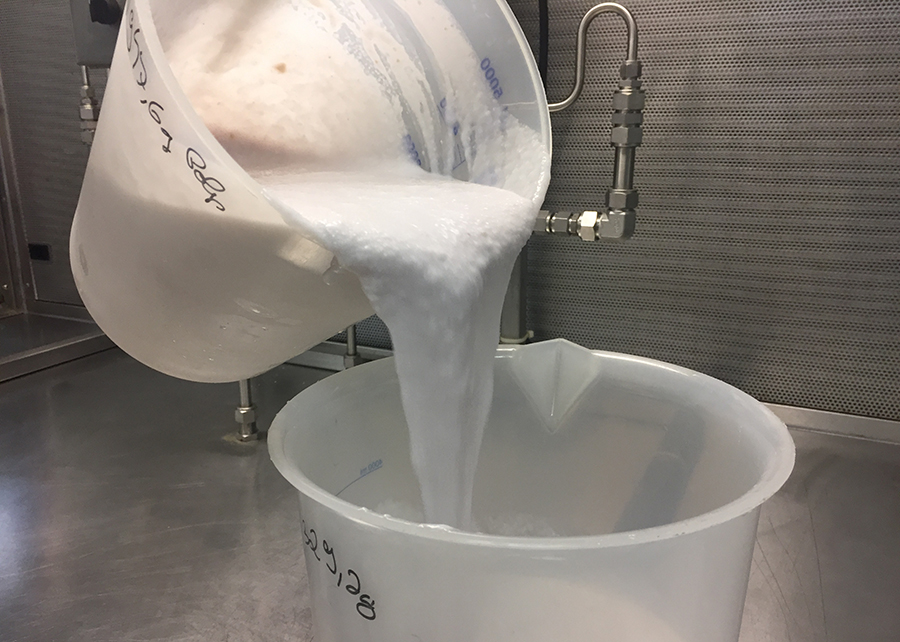 After extracting the albumen, sugar is added in the same ratio of the amount of pulp. The mixture is then brought to low heat, and stirred until it reaches the appropriate level of soluble solids content. Since there is no addition of preservatives, the green coconut preparation must be kept frozen.

Another product, probiotic fermented milk, was developed considering the growing demand for healthy and balanced food that is rich in bioactive compounds and nutritious raw materials. It is potentially functional due to its probiotic characteristic, which confers benefits to human health.

According to Brazilian legislation, fermented milk is the product obtained from the coagulation and reduction of the milk's pH through lactic fermentation promoted by specific microorganisms.

The product can be added with dairy compounds and fruit pulp, in a maximum concentration of 30% of the mass of the final product.

According to the researcher Ana Carolina Sampaio Doria Chaves, the proportion of the green coconut preparation to be added to the probiotic fermented milk was assessed through sensory analysis.

To the sterilized whole milk, skim milk powder is added to increase the protein content and improve the consistency of the fermented milk, followed by Bifidobacterium lactis as lactic bacteria as a probiotic and Streptococcus thermophilus, which is a starter culture for fermentation and ensures that it is carried out faster. Then, the inoculated milk is incubated until it reaches an adequate pH and coagulates. The product must be cooled and rest for about 12 hours before mixing it with the green coconut mixture

The smoothie, a non-alcoholic thick drink, was made with green coconut pulp, acerola pulp, and pineapple pulp, without the addition of water and sugar. The researcher Virgínia da Matta worked on the development of the product and informs that it is tasty and has the potential to replace milk for people with lactose intolerance or allergy to milk proteins. 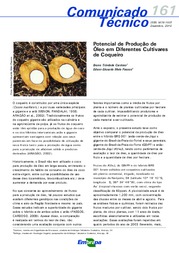 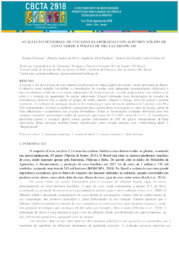 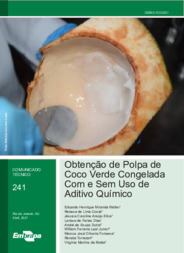