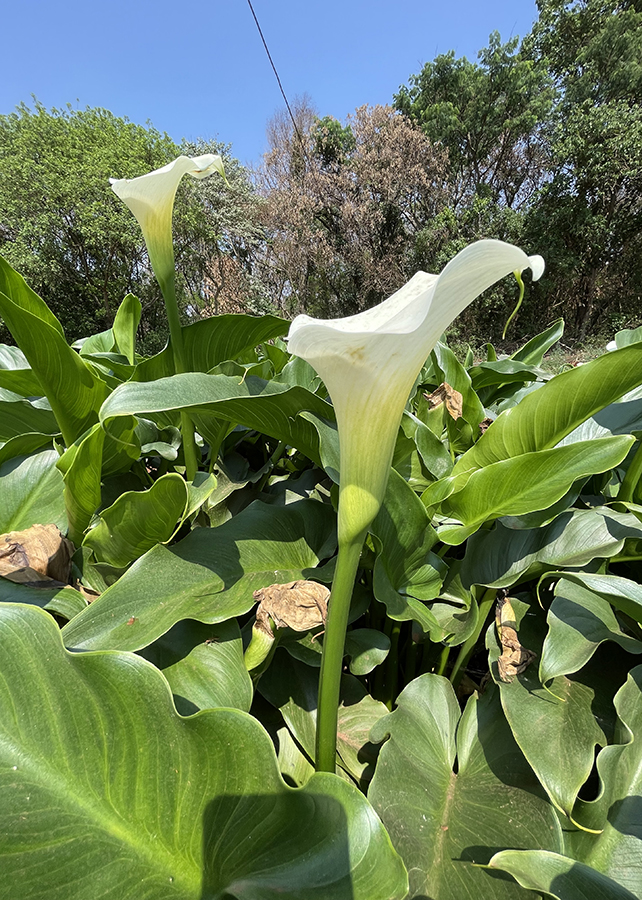 The Aquacultural Garden treats effluents and reuses nutrients in the water for the commercial production of ornamental plants such as as arum lilies, also known as common calla lilies, Brazil's second most exported ornamental plant.

Researchers from Embrapa Instrumentation (developed a ministation to treat effluents from dug-out nursery ponds and also produce flowers. The technology they named Aquacultural Garden treats those effluents, - which contain fish excreta, leftover feed, algae, and microorganisms -, and reuses the nutrients in the water for the commercial production of ornamental plants like arum lilies (Zantedeschia aethiopica). Originally from South Africa, arum lilies (a.k.a. common calla lilies or white calla lilies) are Brazil's second most exported ornamental plant Brazil and has been increasingly demanded worldwide, being capable to contribute for the economic sustainability of the technology.

The Aquacultural Garden beats conventional methods as it offers relatively low construction and operation costs, easy maintenance and low energy consumption, dispenses with chemical products, and reduces dissolved and suspended organic mater. The treated water can be reused for different activities. The technology also reduces fish farming's water footprint, which is the total volume of freshwater used in the full production cycle.

“The combination of physical and biological processes that compose the treatment system enables a marked improvement in the quality of the water to be treated, without the use of chemical products. The system also has the treated water be reused in the own production tanks, which helps the rational use of natural resources”, details the researcher Wilson Tadeu Lopes da Silva, Wilson Tadeu Lopes da Silva, who is heading the project. The study had the participation of students from the Federal University of São Carlos (UFSCar).

With the promising results obtained by the experiment, the technology has entered the stage prospecting a partner to accelerate and conclude the development of the solution for later commercial production and trade.

In intensive aquacultural systems, the production tanks are filled with large amounts of fish that are supplied with feed. If the fish management and feeding are not performed correctly, they can result in environmental problems, such as the increase in organic waste and eutrophication. This phenomenon occurs due to the increase in nutrients, especially phosphorus and nitrogen, which stimulates primary production in the environment through the multiplication of microorganisms like algae and cyanobacteria in the aquatic environment.

If not properly managed, untreat discarded water from the tanks can be a problem for fish production, because it is rich in organic matter. If it is released into a river, it can reduce the availability of oxygen in the water and lead to reduced growth rates or even to mortality of native fish in that body of water. Moreover, discarding untreated, organic matter-rich water adds more pressure to sources of supply.

The proposed Aquacultural Garden meets the Food and Agriculture Organization of the United Nations' (FAO), recommendations for the adoption of good practices in fish farming to avoid environmental impacts. Water reuse is one of them. 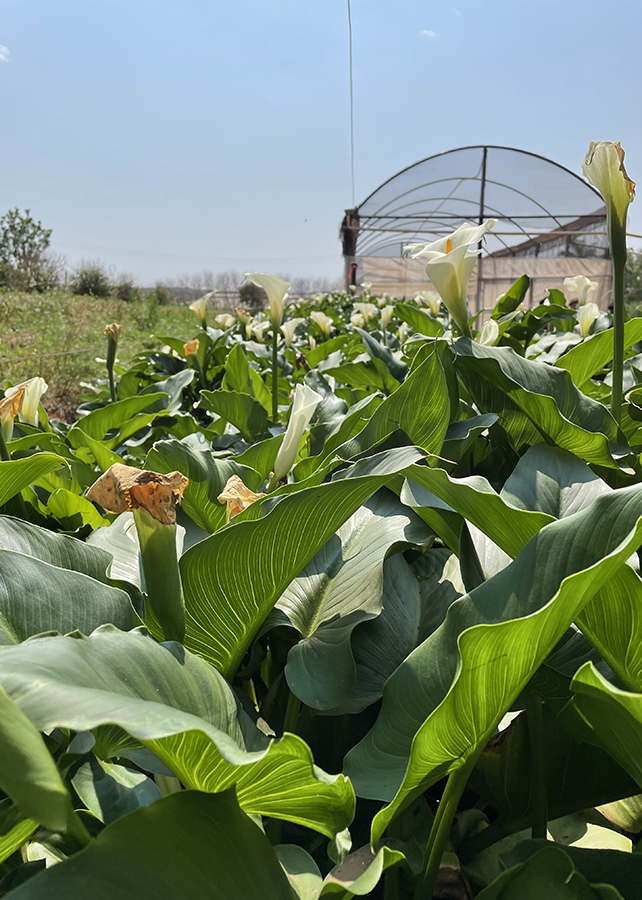 The development of Aquacultural Gardens stems from the Filter Garden, a technology that is also based on flooded areas and aimed at basic rural sanitation, specifically in the treatment of the so-called greywater: residential sewage from sinks, bathrooms and tanks.

According to Wilson Tadeu, the basic idea was to develop a solution to treat the water from fish tanks in a simple way. As he already knew well the operation of the Filter Garden, which allowed for water reuse, the proposal to use the fish farming effluent treatment technology felt natural.

“The use of plants to treat effluents is essential for the operation of the garden, since the macrophytes' roots provide a surface for microbial films, which are mostly responsible for the treatment”, the researcher clarifies .

The project started being implemented in 2018 and started operating in August of the following year in São João farm, located in Ribeirão Feijão basin, responsible for about 30% of the water supply of the population of São Carlos, SP, about 20 kilometers way from the property.

The system is a wetland built to treat effluents from fish tanks. In the set-up pilot system, the maximum outflow is 400 liters per hour, but the researcher comments that the outflow is generally lower, about 300 liters hourly, to increase the average time of treatment, which is of approximately ten hours, and thus provide greater efficiency to the process.

How does the Aquacultural Garden work?

The treatment is performed through a continuous vertical subsurface flow distributed in three retainer boxes, installed with a minimum slope between them, through which the effluent from the fish tank goes.

Wilson Tadeu explains that the boxes, built in wood and waterproofed with geomembrane, are filled with expanded clay and saturated with water. Under the beds, they plant arum lily seedlings, an aquatic plant that helps to improve the quality of the water. To protect and improve plant development, the Aquacultural Garden is covered with a shade screen.

According to the researcher, the effluent from the lake is collected by pipes, and it is pumped and directed to a 10,000-L reservoir, which stores the water to be treated and maintains a constant flow. The slope and the water pressure direct the effluent to the first box in the garden, passing through all of them in a series.

“After leaving the third box, the treated water is oxigenated by a natural, system composed by cascades made of successive steps. Finally, due to the gravity, the treated and oxigenated water then returns to the dug-out fish production tanks”, the researcher reports. 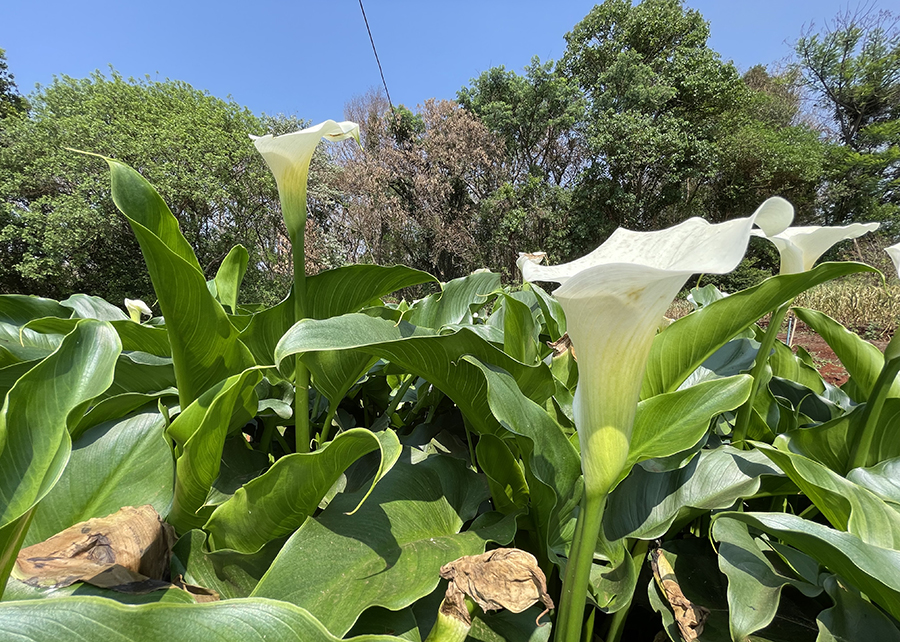 The cultivation of tilapias in dug-out fish tanks is one of the activities developed in the 14-hectare São João farm, a property managed by the family of Flávio and Ilso Marchesin that also produces fruit and vegetables. The Aquacultural Garden experiment has been performed in one of their dug-out tanks, with about 2,000 tilapias in approximately 600 m ³, that has been waterproofed with PVC membranes.

The treatment and reuse of more than 3,500 m3 of water, recorded by a hydrometer installed in the entrance of the system, is seen by Marchesin as a significant gain, especially for the environment. “The biggest benefit of Aquacultural Garden is the rational consumption of water resources. People stop using water from the river or sources so much and preserve natural resources”, says the fish farmer who, since the Aquacultural Garden started working, has only been restituting the water that evaporates from the system.

Brazilian agricultural enterprises that include fish farming require environmental licensing and occasionally a permit to use water resources, depending on their environmental impact, the implementation of effluent treatment and control mechanisms, and compliance with environmental standards.

Therefore, monitoring the quality of the water in such aquacultural enterprises has to be frequent and can be based on the parameters available in the publication Practical recommendations for the assessment of water quality in the production of tilapia in net cages, by researcher Júlio Ferraz Queiroz and collaborators, from Embrapa Environment. Although the publication makes recommendations for net cages, the parameters are the same for dug-out ponds. 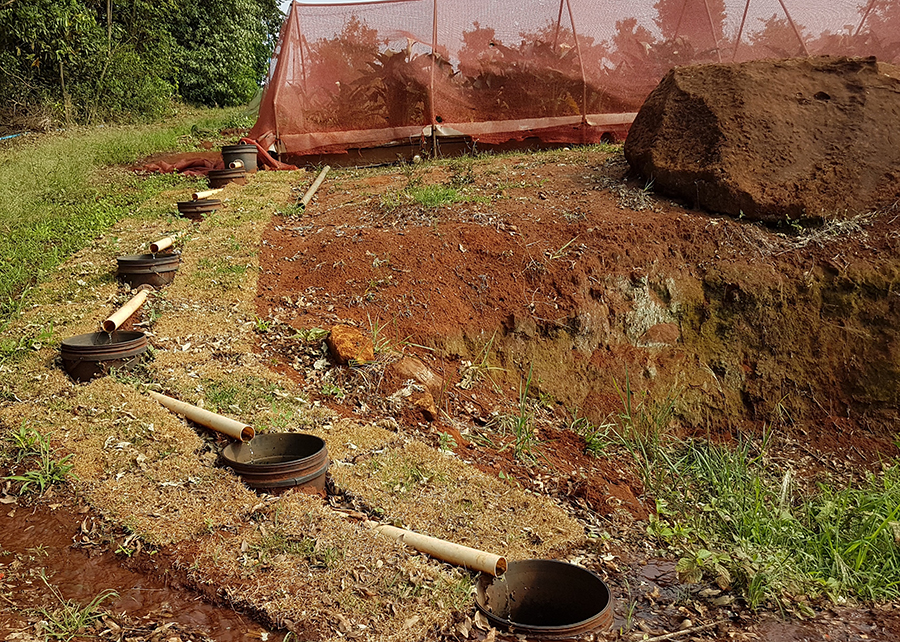 Versatility of the system

Wilson Tadeu recalls that it is possible to size the project according to the needs of different fish production enterprises. But the maximum size to be used depends on not only the volume that is intended to be treated, but also on the area available for construction; the costs of materials, construction and management; the type of fish in production; as well as the plants' trade potential.

For the pilot system set up in the São João farm, the cost was approximately R$ 12,000, but the researcher explains that the expenses with an experimental project are always higher than those implemented on a commercial scale, in due proportions, since all the materials were acquired mostly in local stores, in small amounts and at different moments, on top of the several analyses.

However, the advantages are many for the fish farmer to reduce expenses and also generate income with the production of ornamental plants. They include efficiency in treatment, with the possibility of the reuse of the water treated in the own fish production tank; low energy cost, only requiring the use of a water pump to make the water circulate; constructive simplicity; and low set-up cost, with the use of materials easily found in local stores.

Another advantage pointed by the researcher is the fact that, for the water reuse, the Aquacultural Garden was designed to receive a rather simplified system to oxygenate the treated water, in the form of serial small water falls, like a cascade.

The researcher explains that in fish farming tanks, as the concentration of nutrients in the water increases, seaweed productivity accelerates and there is a growth in organic production, resulting in the rise of phytoplankton biomass - microscopic aquatic organisms - and subsequent reduction in the penetration of light.

Hence the rate at which the organic matter decomposes and the fish's consumption of dissolved oxygen can result in increased concentrations of methane and hydrogen sulfide in the medium. At this stage, there can be more production of organic matter than the system is able to consume and decompose, generating strong changes in the ecosystem's metabolism and in the concentrations of dissolved oxygen in the higher layers, which poses high risks to the fish”, the researcher states. 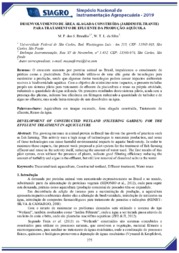 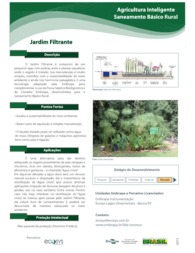