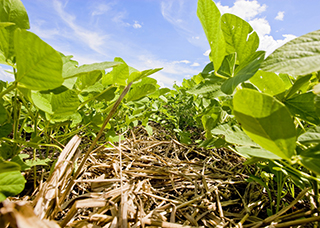 A study led by Embrapa in partnership with the company Revbio (Paulínia, SP) demonstrated it is possible to change the microbiology of the rhizosphere and the aerial portion of plants cultivated in degraded agricultural soils by transferring microorganisms of the plants from a more biologically balanced area to other collapsed areas.

The technique aims at boosting plants cultivated in areas in biotic imbalance by using the microbial community present in areas that express high productivity with no phytosanitary issues, which entails the use of known concepts of plant microbiome engineering.

The technology also proposes a new approach for the use of communities of beneficial microorganisms associated with the roots, making production systems more responsive and balanced.

The Embrapa Environment researcher André May, who coordinated the study, explains that the technique known as biological transplant, which is well-disseminated in other segments of science, was developed using systems in biotic balance, present in cultivated areas of excellency, where plant and microbial genomes pose perfect interactions according to environmental management. “What we made was to bring this reality to the controlled conditions of agricultural production, manipulating the environment, aiming at an optimal interaction between genomes, so that from this complex process we could extract a line of conceptually simple products, already present in nature in its process of constant evolution”, he reports.

The concept was tested in a broad variety of commercial crops and the response was productivity increases between 10% and 30% in real cultivation conditions, including an improvement in the performance of resistance to pests and diseased in some of the croplands, with reduced use of pesticides in some situations. “The treated plant shows a whole other metabolic behavior, plant vigor becomes higher, the leaves are greener, the foliar area is increased, which is reflected in productivity”, the Embrapa researcher explains.

The researchers selected high-productivity plantations without plant health issues to be donors of soil with positive microbial load. Such special soil was added to organically prepared substrata that are conditioned into bags for the cultivation of healthy plants that were grown until an ideal point of microbial recruitment: source of the microbial community, that is then extracted and stabilized through an industrial process.

The scientists then tested different sources of full microbial communities present in cultivated plants that would contain endophytic microorganisms – those that are present within the plants, and rhisophilous microorganisms – which live in partnership with the roots –with different frequency and diversity.

They performed many tests in soybean crops in pre-commercial conditions, one of which took place in the outskirts of São Gabriel do Oeste, MS, with and without the use of pesticides, according to the studied treatments. The tests indicated an increment of 11% in productivity, as opposed to the non-treated control soybeans, and increased potassium concentration in plant tissue. This is important as the mineral is related to crucial functions in plant productivity.

The methodology was also tested in other crops, such as wheat, in the Brazilian state of São Paulo, where an expressive productivity increase of 18% in the treated area against the control area was verified; with corn the productivity was 25% higher; in beans the addition was of 12.95% in comparison with non-treated plants. Meanwhile in tests with carrots, held in Andradas, MG, the productivity was 30.3% higher.

The bacterial profile of plants inoculated with the “pool” of microorganisms was enriched with plant-growth promoting bacterial groups. These groups relate to specific protection and nutrition roles, for instance.

The scientist explains that, through an innovative process, the microorganisms are extracted from the donor plants, which recruit them from especially prepared substrata. Then the microorganisms are stabilized in a water-soluble powder that can be applied in two ways: seed treatment or leaf spraying, depending on the crop. 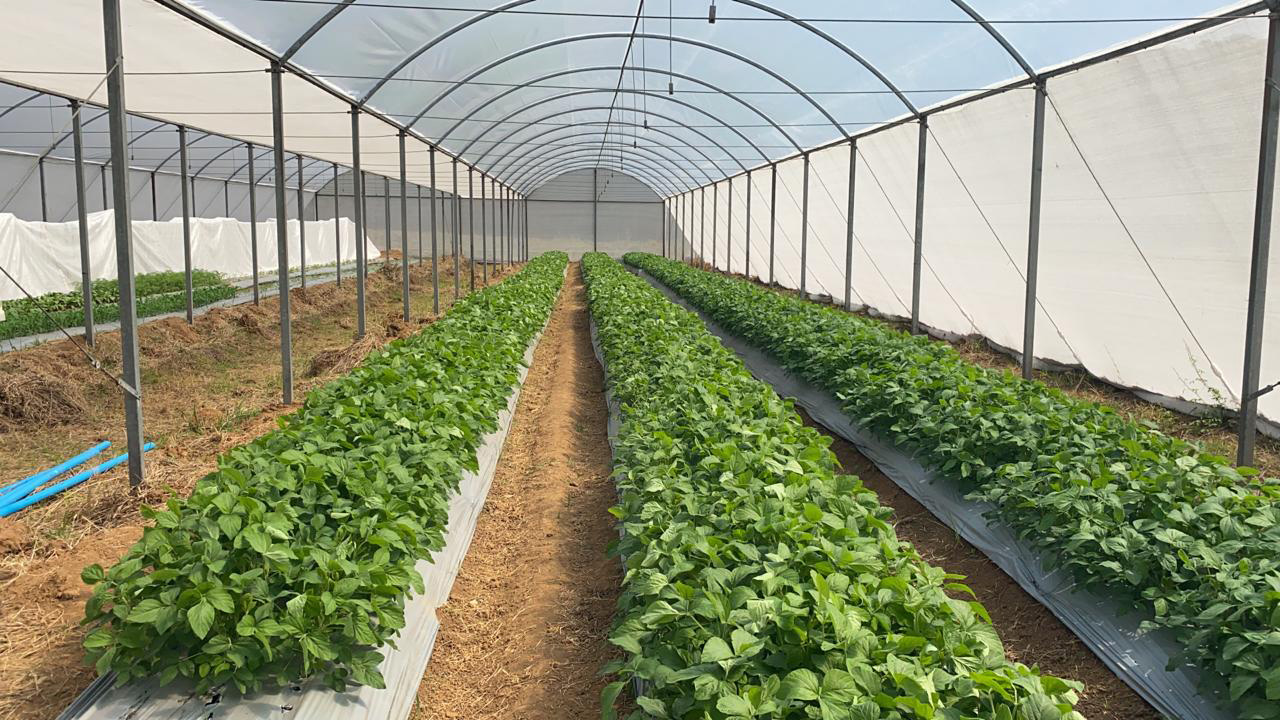 As it is a product that can load the microbial community with affinity for original live cells of the cultivated plant, there is a change in the microbiome of the treated plant and subsequent enrichment of important functional groups. “We treated soybeans with the soybean microorganisms and carrot with carrot microorganisms, and so on”, May explains.

The researcher stresses there is a specific production line for each crop of interest. Thus, the products are generated for each crop and stage of interest, since they vary depending on the crop phenology. “The products come from the plants' aerial portion and from plant roots, with different functions and forms of application”, he states.

The technology is licensed for RevBio, which develops the production process and prepares for new partnerships with the aim of making the product tradeable, with formulas for seed treatment or leaf spraying, and modified dosing for each kind of application.

Pedro Carvalho, from Revbio, reports that the innovation in this technology lies in the fact that it uses plant intelligence to determine what is best in organic, microbiological and chemical terms for its own species.

Carvalho explains that all the processes to extract such microorganisms and organic chemicals from donor plants cultivated in a positive environment were developed from scratch. He explains that since the plant is the system's natural bioreactor, every part of the process, from the set up of the clonal garden to the stabilization and obtainment of the product, requires a high level of innovation and control. “The result has proved to be consistent and promising. Our product works like maternal colostrum, as it is rich in practically everything that the plant needs to develop its immune system and become a healthier and more and productive adult plant”, he asserts.

“The only difference in this process from other existing ones in the market is that we treat the life with life itself, that is, we use the force of nature to the benefit of agriculture,” André May says.

The proposal, he says, is to let the natural evolution of the processes between microorganisms and cultivated plants happen spontaneously, in a controlled environment, but without chemical interferences, aiming at enriching depauperated and tired croplands with biological material from high-yield areas. The technique allows that arable areas that have been exhausted by intensive management benefit from the best potential of high-performance croplands. 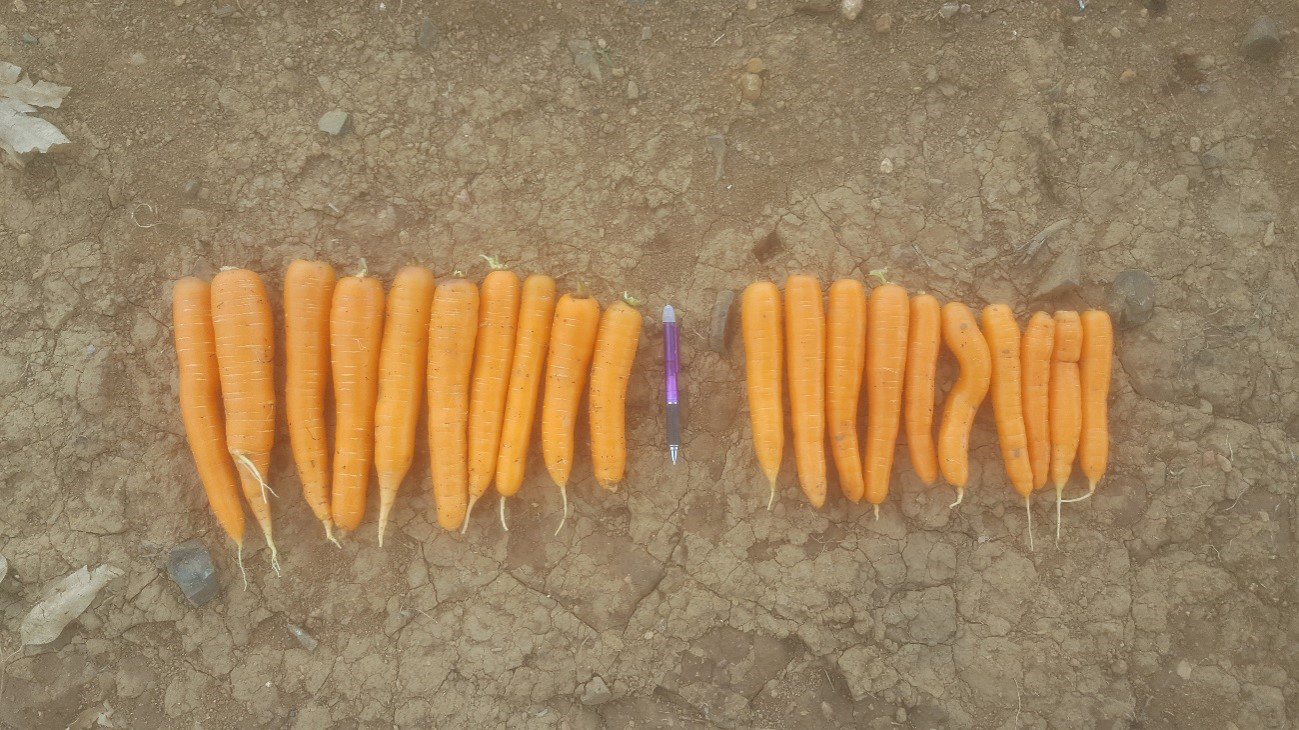 Comparison of the carrots that had biological transplant with those that did not receive the treatment (on the right). Photo: André May