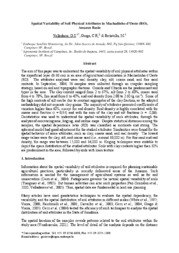 Summary: The aim of this paper was to understand the spatial variability of soil physical attributes within the superficial layer (0-10 cm) in an area of agricultural colonization in Machadinho d?Oeste (RO). The attributes analyzed were real density, clay, silt, coarse sand, and fine sand contents. In September, 2004, 76 samples were collected through an irregular sampling strategy, based on soil and topographic features. Oxisols and Ultisols are the predominant soil types in the area. The clay content ranged from 2 to 67%, silt from 2 to 63%, coarse sand from 4 to 78%, fine sand from 6 to 45%, and real density from 2.08 to 2.60 (g cm-3). Some of the high contents of silt can be due to resistant aggregates of the clay fraction, as the adopted methodology did not separate clay grains. The majority of attributes presented coefficients of variation higher than 40%, except for real density. Real density is highly correlated with the coarse sand fraction (r = 0,94) and with the sum of the clay and silt fractions (r = -0,86). Geostatistics was used to understand the spatial variability of such attributes, through the analysis of semivariograms, kriging, and isoline maps. Despite statistical distances among the samples, the spatial dependence ratio (RD) was classified as moderate and strong. The spherical model had good adjustment for the studied attributes. Similarities were found for the spatial behavior of some attributes, such as clay, coarse sand, and real density. The lowest range values were for clay, silt, and coarse sand (i.e., around 10,000 m). For fine sand and real density, the range was between 15,000 and 16,000 m. Kriging techniques were suitable to depict the space distribution of the studied attributes. Soils with clay contents higher than 30% are predominant in the area, followed by soils with loam texture.

Some of Embrapa's publications are published as ePub files. To read them, use or download one of the following free software options to your computer or mobile device. Android: Google Play Books; IOS: iBooks; Windows and Linux: Calibre.