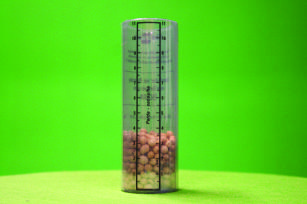 Despite the advances obtained by the agricultural machine industries, mechanized soybean harvests still cause grain waste. According to international standards, loss tolerance is of up to a 60kg-bag (saca or 2.2 bushels) per hectare; anything above that is considered waste. Determining the amount of grains that are not collected by the harvester is done by using, among other methods, the volumetric measuring cup developed by Embrapa Soybeans in the 1980s. The methodology was adapted to the machines and to current cultivation techniques, and it is capable of reducing losses and thus increasing harvest efficiency.

This methodology consists in collecting the grains after the harvester goes through the plantation, in a rectangular two-square meter area framed by a wire which is as wide as the harvester's combine header, and in depositing them in a transparent container (cup) that has a graded scale that directly indicates the grain loss and/or waste that has just occurred. It is a fast, practical and efficient method to quantify and qualify harvested soybeans, without the need to interrupt the operation of the mechanized harvest.

In Brazil, it is estimated that two or more 60-kg bags are lost per hectare, on average, which could easily be prevented by adopting measurement practices during the harvest. The technology is capable of estimating the amount of grains that the harvester does not collect, fall onto the ground and end up being wasted. When farmers lose more than a bag per hectare, that characterizes waste. Among the corrective steps to be taken, Embrapa recommends regulating the machine and changes to harvester operator behavior. With the technology, farmers can make adjustments to their harvest process, increasing efficiency. The speed of the harvester, for example, is one of the factors that directly influences losses. Embrapa recommends a speed interval between 4 and 6.5 km/h so that the feed deck's cutting action works with maximum efficiency and contributes to minimizing grain losses.

Who benefits from it

All soybean producing states in different regions of Brazil.