ICLFS is an acronym for Integrated Crop-Livestock-Forestry Systems. It is an agricultural production strategy that integrates different production systems, namely agricultural, animal farming and forestry systems, within the same area. It can be performed through intercropping, crop succession or crop rotation, so that all the activities are mutually benefitial.

Such integrated systems aim to optimize land use by increasing productivity levels in one area, better using inputs, diversifying production and generating more jobs and income. All of this in an environmentally sound way, with low greenhouse gas emissions or even mitigating such emissions.

Different crops aimed at producing food, fibers or energy can be used in ICLFS. Similarly, the cattle component can be made with beef or dairy bovines, buffaloes, goats, sheep, and, in some cases, even swines and poultry can compose the system. With regard to the trees, native or exotic species can be used for tiber and non-timber purposes.

Due to this large variety of crops, ICLFS can be adapted for small, medium and large properties in all Brazilian biomes. The definitions on the characteristics of the adopted system will depend on the region's edaphoclimatic conditions, logistics, terrain, market, farmer's aptitude, availability of technical assistance, manpower available, among other factors.

Learn from the experiences of who already uses ICLFS

Integrated agricultural production systems can only be made by combining two or three components as follows:

Although integrated crop-livestock-forestry systems are considered innovative systems, some forms of cultivation associating annual and perennial crops with fruits and timber trees have been known since the middle ages in Europe . Systems integrating fruit trees with cattle production date from the 15th century, and some of the apparent causes of their near disappearance are the mechanization and intensification of agricultural systems, difficulties in the manual harvest of the fruits, and administrative issues.

The system of associating crops was copied from nature by indigenous peoples who later transferred to the knowledge to colonizers. In the tropics, the most poignant example comes from smallholders as they have practiced several systems of intercropping.

Historically, European immigrants brought to Brazil a culture of combining agriculture, livestock and forestry that has been adapted to tropical and subtropical conditions since its beginning. In Rio Grande do Sul, for instance, flooded rice was intercropped with pastures. However, throughout the years, the adoption of integrated systems in Brazil has been low, despite the scientific evolution recently observed.

Some efforts to revert the soil degradation process were initiated in the late 1970s, with the adoption of integrated terracing systems in microbasins and the development of technologies to compose the no-till farming (NTF) system, especially in the South of Brazil. Low sustainability can be reversed through technologies like NTF and agrosilvopastoral systems. The full use of NTFS in different soil and climate conditions highly relies on crop rotation, which is one of the practices required for the production and maintenance of mulch on the soil.

The occurrence of soil degradation has induced scientists to search for sustainable production systems, in order to combine increased plant and animal productivity with the conservation of natural resources.

The late 1990s saw the inception of proposals that involved the use of ICL systems with crop-livestock rotations. The forage produced in the period between harvests contributed to soil cover and towards accumulating mulch for the cultivation of grains in succession in no-till farming systems. The cover plants used in this case included Brachiaria grasses, which have taken increasing importance due to their easy cultivation and the expressive forage mass they produce. In light of this, farmers started to use such forage plants as animal feed in the period between harvests.

Then, in the 2000s, demand for timber and the need to improve animals' thermal comfort led to the insertion of the tree component in the systems. Other benefits like protection against wind and frosts or carbon sequestration intensified an interest in such systems. 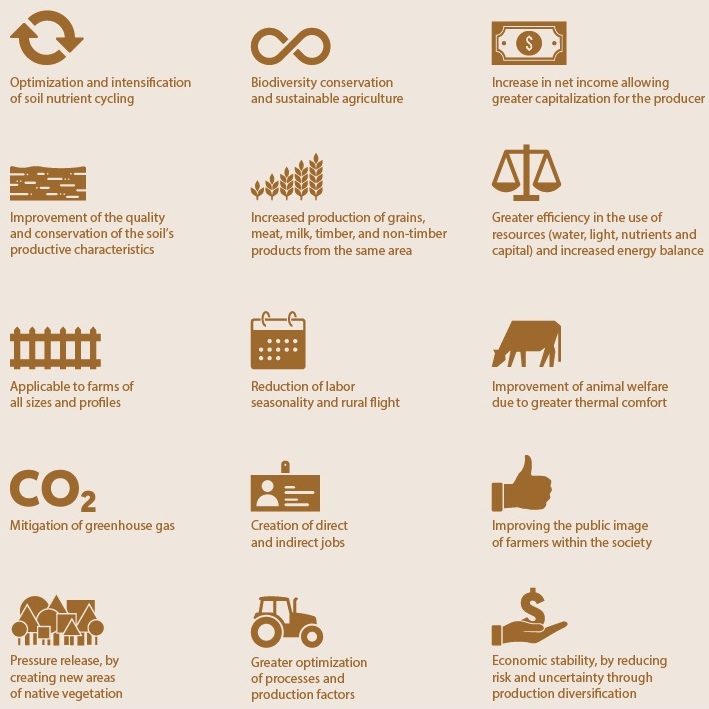 ICLFS can bring different benefits, not only at agronomic, zootechnical and silvopastoral levels, but also in economic, social and environmental aspects.

With regard to the soil, there is a larger amount of organic matter, higher nutrient cycling, better conditions for the development of microorganisms, higher water infiltration, lower humidity losses and lower erosion risk.

The cropland benefits from the mulch left by the grass and from the soil decompaction caused by the roots of the forage plant. As they work as wind barriers, trees reduce the loss of humidity in the soil.

With deeper roots, the forage plants and the trees absorb the inputs used in farming and that would leach into deeper layers, as well as the nitrogen left by leguminous plants like soybeans and beans. With higher availability of nutrients, the grass produces more and with higher quality, benefiting animal performance.

In silvopastoral systems, trees bring thermal comfort to cattle both in hot and cold weather, as they prevent frosts and protect from the wind.  Crop diversification changes the dynamics of pests, diseases and weeds, favoring management in the system.

From an economic point of view, diversification brings more assurances for farmers, keeps the soil in use during the whole year, and generates more jobs in the fields.

If the benefits mentioned were not enough, ICLF systems are environmentally sound. By making more production possible in one and the same space, they reduce the pressure to clear new areas and cause deforestation. Moreover, it is a production system that either has low net greenhouse gas emissions or sequesters carbon, and thus contributes to reduce global warming.

Due to all of such characteristics, ICLFS is one of the technological processes that compose the Plan for the Consolidation of a Low Carbon Economy in Agriculture (ABC Plan), which gathers the voluntary commitments taken up by Brazil at COP 15, in 2009, to reduce greenhouse gas emissions in the agricultural sector. According to the ABC Plan, one of the goals is to increase the adoption of ICLFS in 4 million hectares by 2020.

Similarly, expanding the area with ICLFS is part of the voluntary targets Brazil has pledged in the Paris Agreement. This new commitment includes the strengthening of sustainable intensification in agriculture by rehabilitating 15 million hectares of degraded pastures and an increment of 5 million hectares with ICLFS by 2030.

The relevance of ICLFS as a sustainable technological process for Brazilian agriculture was recognized by the National Policy on Integrated Crop-Livestock-Forestry Systems, created in 2013.

The most recent data on the adoption of ICLFS in Brazil result from a study during the 2015/2016 harvest, commissioned by the ICLFS network and led by the Kleffmann Group. According to the survey, ILPFS were adopted in 11.5 million hectares in Brazil. The Brazilian states that have the largest area with ICLFS adoption are Mato Grosso do Sul; Mato Grosso; Rio Grande do Sul; and Minas Gerais. 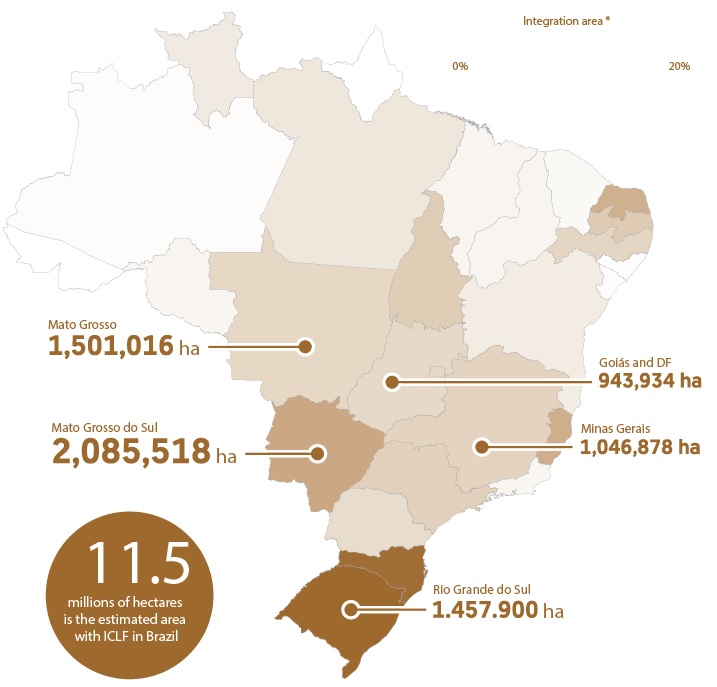 The research showed that in the country, 83% of the area with integrated systems have the ICL configuration; 9% have all three ICLF components; 7% have an ILF system, and 1%, an ICF system.