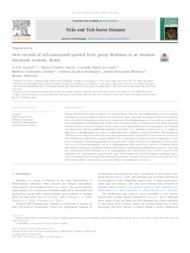 Resumo: Human rickettsiosis has been recorded in the Amazon Biome. However, the epidemiological cycle of causative rickettsiae has not been fully accounted for in the Amazon region. This study investigates the presence of spotted fever group (SFG) Rickettsia spp. in free-living unfed ticks of the Amblyomma genus. The study was conducted in seven municipalities in Rondonia State, Brazil, where the main biomes are Amazon forest, Brazilian Savannah and their ecotones (areas of ecological tension between open ombrophilous forest and savannah). The following tick species were collected: Amblyomma cajennense (sensu lato) s.l., A. cajennense (sensu stricto) s.s., A. coelebs, A. naponense, A. oblongoguttatum, A. romitii, A. scalpturatum and A. sculptum. A total of 167 adults, 248 nymphs and 1004 larvae were subjected to DNA extraction and polymerase chain reaction (PCR) to determine the presence of SFG Rickettsia spp. PCR-positive samples included: one A. cajennense s.s. female and one A. cajennense s.l. male from a rural area in Vilhena Municipality; 10 nymphs and a sample of larvae of A. cajennense s.l. from a periurban area in Cacoal Municipality; and an A. oblongoguttatum adult male from a rural area of Pimenta Bueno Municipality. All sequences obtained exhibited 100% identity with Rickettsia amblyommatis sequences. This is the first confirmation of SFG Rickettsia in an A. oblongoguttatum tick. Furthermore, this is the first record of SFG Rickettsia in the municipalities targeted by this study. These results warn that SFG Rickettsia circulation poses a threat in Rondonia State (among Amazon-Savannah ecotones), and that this threat is increased by the fact that SFG Rickettsia infect a human-biting tick species hitherto unconfirmed as a vector.