Downregulation of growth plate genes involved with the onset of femoral head separation in young broilers. 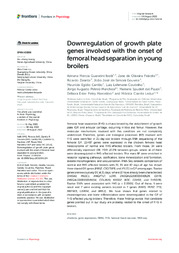 Resumo: Abstract: Femoral head separation (FHS) is characterized by the detachment of growth plate (GP) and articular cartilage, occurring in tibia and femur. However, the molecular mechanisms involved with this condition are not completely understood. Therefore, genes and biological processes (BP) involved with FHS were identified in 21-day-old broilers through RNA sequencing of the femoral GP. 13,487 genes were expressed in the chicken femoral head transcriptome of normal and FHS-affected broilers. From those, 34 were differentially expressed (DE; FDR ≤0.05) between groups, where all of them were downregulated in FHS-affected broilers. The main BP were enriched in receptor signaling pathways, ossification, bone mineralization and formation, skeletal morphogenesis, and vascularization. RNA-Seq datasets comparison of normal and FHS-affected broilers with 21, 35 and 42 days of age has shown three shared DE genes (FBN2, C1QTNF8, and XYLT1) in GP among ages. Twelve genes were exclusively DE at 21 days, where 10 have already been characterized (SHISA3, FNDC1, ANGPTL7, LEPR, ENSGALG00000049529, OXTR, ENSGALG00000045154, COL16A1, RASD2, BOC, GDF10, and THSD7B). Twelve SNPs were associated with FHS (p < 0.0001). Out of those, 5 were novel and 7 were existing variants located in 7 genes (RARS, TFPI2, TTI1, MAP4K3, LINK54, and AREL1). We have shown that genes related to chondrogenesis and bone differentiation were downregulated in the GP of FHS-affected young broilers. Therefore, these findings evince that candidate genes pointed out in our study are probably related to the onset of FHS in broilers.